We get quite used to seeing various leaks leading up to the release of the next version of the Apple iPhone, and we also saw a similar situation leading up to the recent launch of the latest Android flagship smartphone from Samsung, but that is not to say other lower end handsets don’t regularly get leaked. Today we have news of a Motorola QWERTY slider that is bound for Sprint being leaked seemingly running Android ICS 4.0.

Only last week we told you about an upcoming QWERTY slider device by Samsung that was heading to T-Mobile, and now as Android Central are reporting a handset is currently in the works that also features a QWERTY slider keyboard, and is heading to rival carrier Sprint via Motorola. The image that can be seen below is all that is basically known about the handset at this present time.

What can be seen though is that there is a keyboard with five rows of staggered keys, and dedicated arrow buttons. It is also believed that the upcoming handset will feature a qHD display, and it can be seen there is the Sprint Music app pre-installed.

Of course while the list of specifications for the handset is remaining thin on the ground everything else is just guess work. There is a good chance the device will be LTE compatible, and it is wondered if the handset will finally see a device from Motorola that is powered by Intel. The two companies back at the beginning of the year announced they would provide a number of handsets due for release this coming fall.

It can also be seen in the image that apart from the QWERTY keyboard, there are no other physical keys so it will use virtual buttons on the screen for home and multitasking, which is a different move that we have seen recently from the likes of Samsung and LG. This hints that the device will be using the Android Ice Cream Sandwich operating system at launch, and is the way that Google originally wanted for its new software when it was first announced.

Are you a Sprint customer who likes the idea of a physical keyboard? 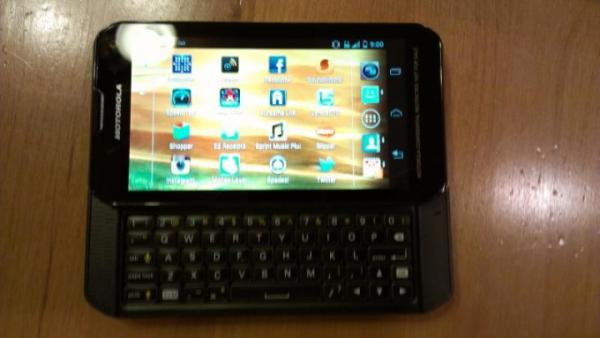