Many of you will now have heard of the announcement from Microsoft regarding its own Surface tablet devices. There are two on the way, one for Windows 8 Pro and the other a Windows RT variant. We’ve already given you some details on the tablets so now it’s time to look at the rather intriguing Touch Cover and Type Cover for these tablets, which cleverly also act as keyboards.

If you want to check out more on the tablets themselves head here or to see a video of the new Surface Windows RT tablet see here. We’re pretty fascinated though by these covers that Microsoft seems to have put an awful lot of thought into. There are no details on pricing yet, either for the tablets or the two optional covers. In fact we don’t actually know yet whether the covers will come bundled with the tablet or be optional extras. However we do have further news for you on the Touch Cover and Type Cover to give you more of an idea of what they offer and what the differences are between the two.

Both of these covers are magnetic and also feature keyboards, a great idea for using in conjunction with either of the Surface tablets to give a more laptop-like experience. Engadget managed to get a look at the Touch Cover and Type Cover and although they were able to briefly handle them they were not working models. Nevertheless they did come up with some interesting details about the covers, one being multitouch input and the other with physical keys.

The Touch Cover is capacitive, is 3mm thick and the flatter of the two and the keys are described as have a “slightly scratchy surface.” This will be on offer in 5 color options and also features an accelerometer which rather intriguingly can tell the key being hit, how fast and how much power is behind the hit and also means that when the keyboard is folded back against the Surface the keyboard powers down. The Touch Cover magnetic connector makes it easy to affix to the Surface tablet, and of course the cover also gives the tablet valuable protection.

The Type Cover is 5mm thick and features moving keys for a more traditional typing experience. The keys are described by Engadget as tightly packed with the “flat keycaps almost blending into one another.” This one also features an accelerometer as an added interest point and we imagine that it will be more expensive than the Touch Cover. In the brief time that Engadget had with the covers the initial conclusion was that the keyboards of the covers could take a bit of getting used to.

If you want to see more on Microsoft’s Surface tablet and these covers then head to this Microsoft page here. It’s difficult to make a judgement on the Touch Cover and Type Cover when working models were not available but our initial thoughts are that these look extremely promising additions to the Surface tablet. Will you be taking a good look at the Surface tablet when it appears later this year? Do you think either of these covers will enhance the tablet experience? Let us know with your comments. 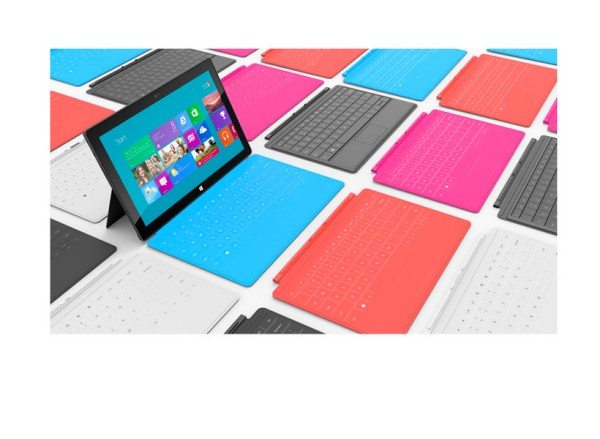