Way back in April we informed readers about the upcoming Meizu MX Quad-core smartphone and told how it was due to be released in mainland China and Hong Kong sometime in June. It looks as though Meizu has just snuck in under the line as we have now learned that the release date is penciled in as June 30, although the phone is now officially titled the Meizu MX 4-core.

We rated the appearance of the Meizu MX 4-core, Meizu’s flagship smartphone, and notable specs that include a 1.4GHz Exynos quad-core processor, 1700mAh battery, 4-inch ASV display with resolution of 960 x 640, 8-megapixel rear camera and 0.3-megapixel front-facer and HSPA+ connectivity. The internal storage starts at 32GB as opposed to the 16GB of the original dual-core MX. The MX 4-core also runs on the new Meizu Flyme1.0 OS based on Android 4.0 Ice Cream Sandwich.

Those with older Meizu Android handsets should be able to get the Flyme OTA update in early July rather than in June as originally stated. According to Engadget the Meizu MX 4-core will be carried by Hong Kong’s PCCW. The MX 4-core 32GB model is priced at HK$3099 (US$400) and PCCW will be offering it free on differing tariffs. No such details have yet been clarified for the 64GB model priced at HK$4099 (US$530).

Various back cover colors are also available and those pre-ordering the 4-core in mainland China and Hong Kong before June 30 can pick one of the colored back shells to replace the white one for free in milky lime, ivory white, lilac purple or misty pink. You can see more on the Meizu MX 4-core and Flyme at this Meizu page.

Are you in Hong Kong or mainland China and are you intending to make the MX 4-core your next smartphone purchase? What features and specs of the 4-core are you most impressed with? Send your comments to let us know. 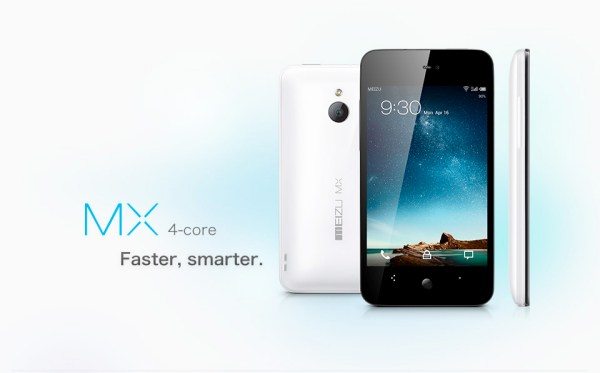