Up until now the Sony Xperia name has applied to smartphones but it seems a new Xperia tablet device is now on the way that could be revealed later this month. It will retail at a price of around $450 and as it’s equipped with a quad-core processor we reckon this one sounds like another real Android tablet contender.

Leaked news of the Xperia Sony Tablet (believed to be the official name) tells of an NVIDIA Tegra 3 quad-core processor, 16, 32 or 64GB internal storage options and 3G connectivity. It will also feature the Android 4.0 Ice Cream Sandwich operating system or even later, which will excite those after their first taste of 4.1 Jelly Bean. After the success of the recently released and reasonably priced Google Nexus 7 tablet it will be interesting to see if demand is there for a more highly priced Android tablet but hopefully it won’t take too much longer to find out.

Mobiflip, a German website, unearthed leaked images of this Xperia Sony Tablet as reported by The Verge and if you liked Sony’s Tablet S then it seems you’re likely to be interested in the Xperia tablet as it is touted as being slimmer and more powerful than the Tablet S. Other additions to the Xperia tablet will be a 6000mAh battery that will give around 10 hours of WiFi usage and the price will be $449.99, $549.99 and $649.99 for the 16, 32 and 64GB options respectively. A keyboard cover in the vein of the Microsoft Surface tablet cover will also be available, priced around $100.

There’s no news yet on a launch timeframe for the Xperia Tablet but the money is on it being unveiled at IFA in Berlin on August 31 so it seems reasonable to assume a Q3 release date. We think the leaked images show a device that looks rather tantalizing and we’ll be waiting to hear more on this.

We’d like to hear your thoughts on Sony bringing out an Xperia tablet. Do you think it could be as successful as the Xperia smartphones and what do you think of the proposed pricing? Send your comments to let us know. 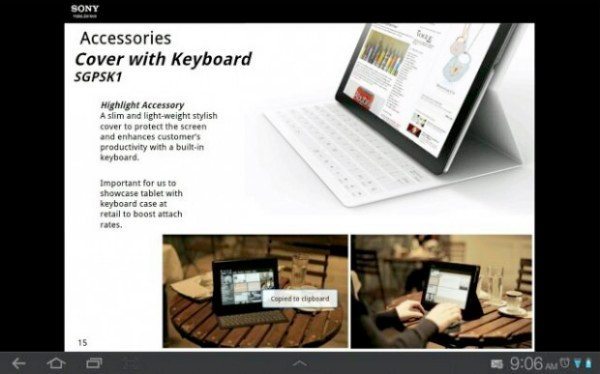 One thought on “Sony Xperia Tablet not smartphone reveal this month”