If you happen to be on a tight budget there are plenty of low cost Android slates available in the tablet space, and it appears there will be yet another low price Android tablet coming out to play for the budget conscious this month in the form of the Energy Tablet i8 from Energy Sistem.

According to an article over on Engadget, the Energy Tablet i8 is basically a minor update to the company’s existing tablet line up, with the new Energy Tablet i8 retaining the same 8-inch LCD touch screen as its Android 2.3 Gingerbread counterpart, but this time the slate comes sporting Android Ice Cream Sandwich.

Other specs with the Energy Tablet i8 include a 2 megapixel rear facing camera, 1080p video, a VGA front facing snapper, 1GB RAM, 8GB internal storage, 802.11b/g/n WiFi, a 1GHz ARM Cortex A8 processor, microSD expansion up to 64GB, and a 3800mAh battery.

The Energy Tablet i8 is said to have an ultra-slim aluminium body, and weighs in at just 491 grams, and the Android ICS slate is available to pre-order as of right now, with an expected release date of the 23rd of August, and commands a price tag of â‚¬185, which is roughly 227-bucks.

However at that price, if you are in the market for a new Android tablet, then you could always save up a few extra Euros and opt to go for the Android Jelly Bean packing Google Nexus 7. 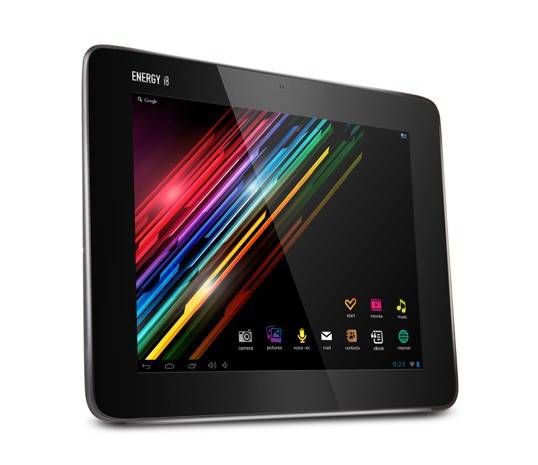 One thought on “Budget ICS Energy Tablet i8 releasing this month”