More details about the upcoming Windows Phone 8 handsets from Nokia are continuing to be revealed by the company, as it looks to capture the smartphone buying public’s imagination away from Android and the Apple iPhone. We can now tell you that the Nokia Lumia 920 is glove friendly and there will be a JBL Power Up wireless speaker available.

Details are coming out thick and fast from Nokia about the Lumia 920 and its cheaper brother the Lumia 820. We have already told you about the Fatboy wireless charging pillow, and now we have more details about the display on the Lumia 920.

Many of you will have tried to use your smartphone during the winter while wearing gloves, and would have quickly discovered it is impossible with most smartphone touchscreens, but as SlashGear are reporting the Lumia 920 uses a new “super sensitive touch” display.

This can be used even with gloves where most capacitive displays need contact with human flesh to work. The Nokia Lumia 920 features two different touch modes that automatically switch to suit what you have on your fingers.

The handset works as usual when used with bare fingers, but will switch to a more sensitive mode when a user is wearing gloves. Nokia hasn’t revealed how the system actually works but it will be a welcome feature in many people’s eyes especially as winter is fast approaching.

Meanwhile SlashGear are also reporting that Nokia has revealed the new JBL Power Up wireless speaker for the Lumia 920. The speaker can pair and stream music from the handset without the need for wires, and achieves this via a combination of Bluetooth and NFC.

Users just have to hold the handset close to the speaker for it to automatically pair and re-route the audio through to the JBL, and it will also charge your Lumia 920 while you are listening to your music as well. 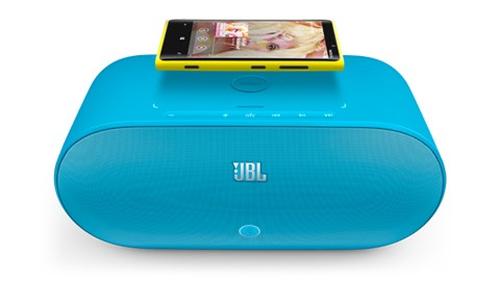