We’ve been keeping Phones Review readers informed with all the developments about the upcoming BlackBerry 10 OS and after being pushed back several times it’s now scheduled to make an appearance in the first quarter of 2013. It’s no secret that RIM is pretty much relying on the new operating system to recover from its ailing fortunes so the success of BlackBerry 10 is rather crucial. Today we have a hands-on look at a preview of BlackBerry 10 with a Dev Alpha B phone shown running BB10.

Currently the BlackBerry Jam Americas conference is taking place in California and developers there will be given a Dev Alpha B device for BlackBerry 10 (the first round of Dev Alpha devices, of which there were 5,000 already ran out, hence the B). Some have already been lucky enough to get their hands on the Dev Alpha B phone and so got a close-up experience of the upcoming BlackBerry 10 OS, which has so far been kept extremely well guarded.

CrackBerry managed to take a video of its hands on look that you can see below this story or you can also see a walkthrough video of BlackBerry 10 with RIM’s Michael Clewley or another video of the BB10 Time Shift Camera feature at the CrackBerry link above. The videos of the hands-on look with a Dev Alpha B device give us at least some idea of what BB10 will bring when it finally arrives as it shows an early version of BB10 rather than the Playbook OS used on the original Alpha phone.

The Dev Alpha B phone differs slightly in appearance from the original Alpha device handed out as it has a removable battery door, is of a more sturdy form, has squarer corners and also a raised lip on the lower edge of the front of the device. However the specs and internals of the Alpha B device are said to be very close to an example of one of the first BB10 devices that will arrive next year sporting a full touchscreen. It looks likely then that the first BB10 full touchscreen device will feature a 1800mAh LS-1 battery as used in the Dev Alpha B device. 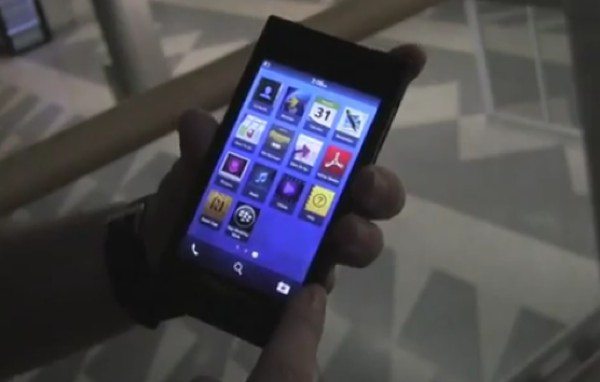 As far as BB10 is concerned some of the most significant improvements and changes are also detailed. The lockscreen for instance can opened by merely swiping a finger up from the bottom of the screen and also allows the user more convenient access to the camera. The main App Drawer on the home page features horizontal scrolling of panes and the ability to jump panes and there’s a new feature called Active Frames for open apps that have been minimized. The BB10 unified inbox will be referred to as the BlackBerry Hub and integrates such items as Facebook, Twitter, BBS, SMS and more and will be accessed by the user swiping upwards and then taking their thumb to the right.

There’s also a quick settings menu and another clever innovation concerns moving the url bar to the bottom of the browser meaning it’s within reach of the user’s thumb, therefore enabling one-hand UI touches. The BlackBerry App World is also updated and a welcome move for users here is the ability to make direct purchases of movies, music and more. Another key highlight of BB10 is a big revamp of BlackBerry Messenger and CrackBerry gives this high praise indeed, with changes to BBM Groups, Pictures, Lists and Events and your BlackBerry ID playing a part.

This is just a small taster of what will be coming to BlackBerry 10 and we have to say it’s all looking good so far. You may also be interested in our previous article today about the Dev Alpha update for BB10 and Dev Tools beta. We’d really like to hear reader’s views on BB10 from what we’ve seen so far. Remember you can see a video below this story.

Are you a BlackBerry enthusiast and looking forward to BB10 and the devices that will run it? Which changes to the current BlackBerry OS would you like to see most? Let us have your comments on this.