Arguably the two most wanted smartphones in recent weeks has been the Apple iPhone 5 and Samsung Galaxy S3, at least until the Galaxy Note 2 becomes available next week in certain regions. Having flagship devices available obviously leads to a number of comparisons between the devices, and we now have a Samsung Galaxy S3 vs iPhone 5 display test fracas for you.

Earlier today we had the two handsets battery life being compared, and now as AppleInsider are reporting testing company DisplayMate Technologies has put the displays of the two handsets through their paces in some testing. The company in its opinion found that the 4-inch display of the new iPhone was more refined than what is available on the Samsung Galaxy S3.

The testing also involved the display of the iPhone 4 to try and see how the company had improved its display’s during the last two years. There were a number of tests carried out on the handsets screen’s that included brightness and contrast, screen reflections, viewing angles, colours and their intensities, and how the displays affected battery life.

It was concluded that Apple had improved the performance of the iPhone 5 display either by a small margin, or in other areas a great deal. With the iPhone 5 Apple has managed to reduce display reflectance by 52% when compared to the iPhone 4, and has also improved contrast by 57% while improving colour accuracy.

The calibration of the display was also found to be very good even though it suffered from minor gamma intensity, but there have been some early reports of owners reporting some light leakage from the handset. The Galaxy S3 meanwhile still performed quite well but the OLED technology in the display is still behind that what is used for the LCD tech in the iPhone 5.

Brightness was lower on the Galaxy S3 due to the power efficiency of the OLEDs, and concerns were raised over premature aging of these. In conclusion the team gave the iPhone 5 an A rating, while the Galaxy S3 only got B+ because of poor viewing angles and calibration.

There will be many who don’t agree with these findings though especially when it comes to using the handsets in the real world, and doing things such as watching videos or browsing the web.

Which display do you think is best? 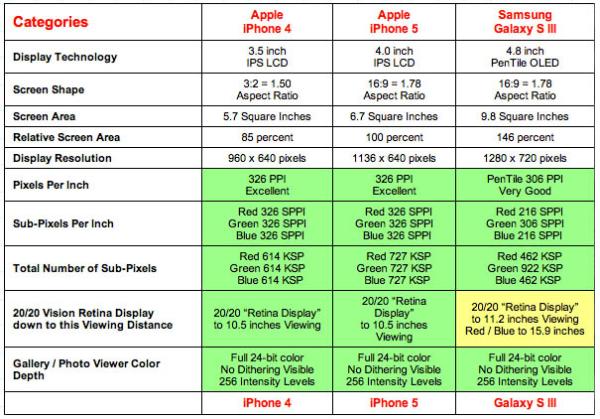