We always try to bring news to readers about operating system updates coming to their phones and have been giving details about Android 4.0 ICS updates for some time and more recently Android 4.1 Jelly Bean updates. Today we have bad news for Motorola Atrix 4G, Electrify and Photon 4G owners as it seems that not only will their devices not be updated to Jelly Bean but they will also not get the ICS upgrade.

While some consumers are frustrated that their devices still haven’t received Jelly Bean we should spare a thought for the many people whose devices haven’t even received the 4.0 Ice Cream Sandwich update yet. Even worse if you’ve hoped that your phone will eventually get the update and then you find out that it won’t be forthcoming. Motorola has now officially confirmed that there will be no ICS upgrade for the Atrix 4G, Electrify and Photon 4G and that their days will be numbered on 2.3 Gingerbread.

There have already been many complaints from Motorola device owners and frustration about the speed that it has taken Motorola to issue OS upgrades. We recently told for example how Droid Bionic owners are still waiting for ICS although Motorola has now said it will come in Q4 and issued an apology. News that ICS is not coming to the Atrix 4G, Electrify and Photon 4G was brought to us from Android Authority sourced from Motorola Mobility. The new software lead at Motorola, Punit Soni, said that “tough choices” had to be made regarding Android software upgrades before specifically citing that the above phones will not receive ICS. 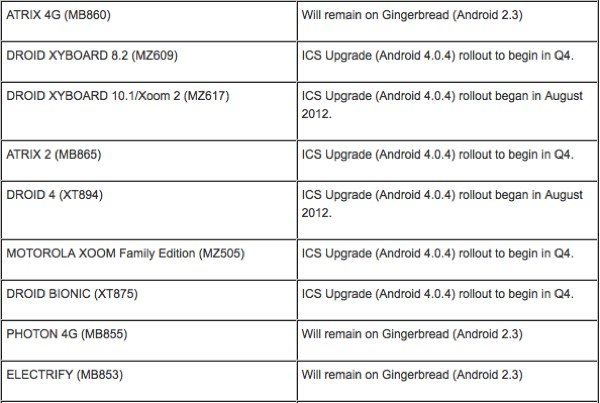 Motorola has also updated its device upgrade list and as you can see here the status of these three handsets now reads, “will remain on Gingerbread.” Atrix 4G, Electrify and Photon 4G owners among you will be left feeling pretty frustrated and disappointed this weekend then and we’d like to hear your views on this. Do you feel Motorola has let you down by not updating your particular phones to ICS? Send your comments to tell us how you feel about this.