If you’re a regular reader you’ll know we like to keep you informed about software updates heading to devices. Today we have news for Samsung Galaxy S3 (S III) owners on Verizon as a new software update has just been approved. However, if you’re one of the many waiting for Android 4.1 Jelly Bean to hit the Galaxy S3 then please don’t get excited as this is is not Jelly Bean but just a minor update.

We’ve been following developments of the Jelly Bean update headed to the Galaxy S3 for some months now and the response to our articles on this is always huge. We’ll come back to that but firstly give you details on the update that is coming to the device on Verizon, build VRALHE. It’s a 62MB download with an estimated software download time of 5 to 7 minutes and an estimated update time of 5 to 7 minutes and Samsung and Verizon are urging owners of the Galaxy S3 to proceed with the update when ready.

Once again, this isn’t the taste of Jelly Bean that everyone is waiting for but this software update will bring users of the Galaxy S3 on Verizon an enhanced zooming feature added to the interface, reduced device resets and improved stability when in Google Play. Owners of this smartphone on Verizon will be receiving notification and then need to tap ‘OK’ to continue. At this point the phone will power off before coming back on again and proceeding with the installation. Alternatively you can hit ‘Defer’ but you will be reminded of the update being available every 30 minutes. Another route when you receive your first notification is to opt to manually update by hitting Home>Applications>Settings>About Phone>and then System Updates. Then hit Restart and Install to proceed with the upgrade. When your device powers off and on again you should see the screen below. 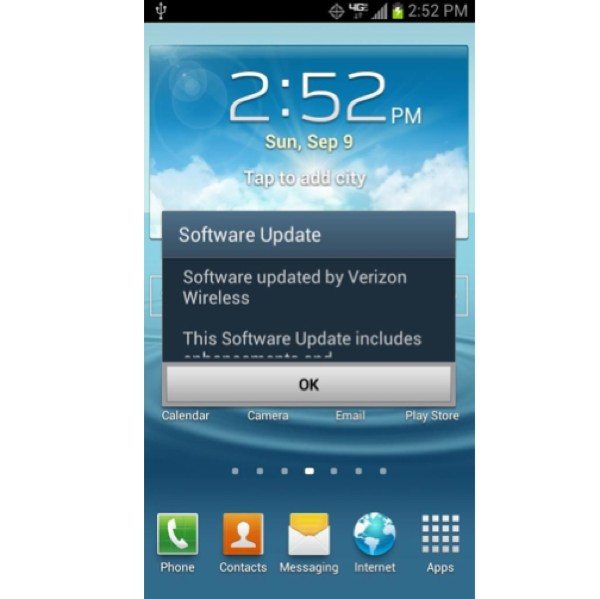 As we mentioned earlier in this post we know that many of our readers are patiently, or not so patiently waiting for 4.1 Jelly Bean to come to the Galaxy S3 and when we recently spoke of the frustration over how long this is taking in the U.S. we received a huge amount of comments from readers, many of whom were pretty hacked off.

Many readers expected the update several months ago and Samsung once confirmed it would be pushed out in September. Now we’re halfway through October and there’s still no sign although one site currently lists the Galaxy S3 on Verizon, AT&T, Sprint, T-Mobile and U.S. Cellular as pending and due in November. Meanwhile the official Samsung Jelly Bean update page still lists these all as simply “coming soon.”

We’ll certainly continue to keep readers informed about further developments with Jelly Bean for the Galaxy S3 but in the meantime remember the minor update above that you should shortly receive notification about if you’re a Verizon owner with this smartphone. We’re interested to hear from our readers about this state of affairs.

Are you the owner of a Galaxy S3 on Verizon or any of the other US carriers? If so, how do you feel about the fact that you’re still waiting for Jelly Bean some months after it was announced? Send your comments to let us know.