BlackBerry 10 about experience not specification, interview

For some time now we’ve been writing about BlackBerry 10, the upcoming operating system from RIM, and its importance to the revival of the brand. There’s no doubt that RIM and the future of BlackBerry has an enormous amount riding on the success of BB10 and devices running it. However RIM CEO has now given an interview to say that BlackBerry 10 will be more about the experience than the specifications.

It’s no secret that RIM’s fortunes have been lacking to say the least just lately and the arrival of BlackBerry 10 has already been deferred several times. The importance of getting the new operating system exactly right though cannot be underestimated and maybe RIM decided that releasing it with no glitches or flaws and leaving it open to criticism was more important than rushing it. The latest we’ve heard is that BB10 and the first devices using it will release in Q1, 2013 and many are eagerly waiting to hear what it will offer.

Now Cnet has conducted an interview with Thorsten Heins, RIM CEO, who seems to be playing down specifications of devices and feels that the total experience of using a device and its operating system is more important than specs alone. In the interview Heins telling says, “We’re not in the spec race, we’re not like six cylinders are better than four, we’re in the experience race,” adding that RIM wants using a BlackBerry to be fun. It’s important to note that RIM has high expectations from BB10 and rather than refer to it as simply a new operating system is referring to it as a “mobile computing platform” in a real effort to offer something better and different.

Heins also talks about the Android and iOS application grid for touchscreens referring to hitting apps and then the back button sequentially. He then says that rather than use this “in and out” system BB10 will instead offer something more akin to “Peak and Flow.” The standard Message app will be replaced in BB10 for instance by the BlackBerry Hub, always there and always ‘on,’ rather than being an app. 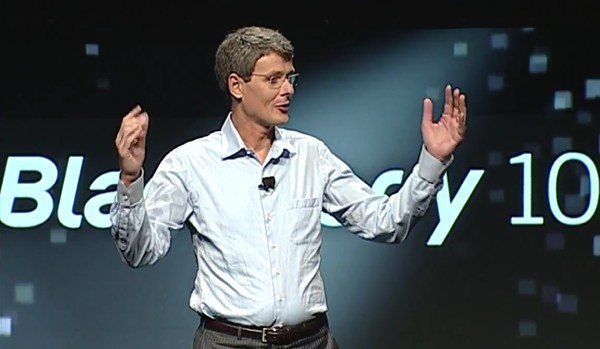 We shouldn’t mistake Heins’ emphasis on experience rather than specs as meaning that new BlackBerry 10 devices won’t have the more high-end specs that everybody is hoping for. Although recent BlackBerry devices haven’t been exactly cutting-edge, a couple of weeks ago we brought readers news about one of the upcoming BB10 devices, the BlackBerry Aristo, and we and many others were impressed at the efforts that are being made to improve devices.

Although the leaked specs have not yet been confirmed if they are accurate there will be a lot of pleased BlackBerry enthusiasts. Rumored specs included a 1.5GHz quad-core processor, 4.65-inch OLED touch display with 1280 x 720 resolution, 2GB of RAM and 16GB of internal storage (expandable), 8-megapixel rear camera with 1080p video capture and also a 2-megapixel front-facing camera.

With devices with these sort of specs, if RIM gets BB10 right then it’s going to add something really interesting to the current mobile market. Add to this the ‘experience’ of using BlackBerry having such high importance and this could mean big things for RIM. The questions simply remains, will RIM get BB10 right? We’re interested to hear from our readers on this.

Are you a BlackBerry enthusiast waiting for your first taste of BB10 and the new devices that will use it? If you usually use a smartphone on a different platform do you think there’s any chance that BB10 could convert you? Send your comments to let us know.

5 thoughts on “BlackBerry 10 about experience not specification, interview”