We’ve been following the sorry tale of the ICS update since Motorola first confirmed that it was coming to the Droid Bionic and that was back in December 2011! After many months of waiting Motorola finally informed Droid Bionic users that the update would roll out in Q3 and there were plenty of owners who were disappointed and felt let down that the update was taking so long to come to them. Especially bearing in mind the update, even at that point, was set to arrive many moons after other smartphone users got the upgrade for their device.

A few weeks ago we learned that the update was now pushed back to Q4 and discussed the frustration that many Droid Bionic were feeling at the lack of any certain news on the ICS update for the phone. We had a huge response to this article with over 200 readers’ comments that made their dissatisfaction with the situation very clear. Finally last week we brought the news that the ICS update might be closer as people were being asked to take part in soak tests, usually a good sign that an OS update is on the way fairly soon. Today though we have even better news as we can now tell you that the ICS update for the Motorola Droid Bionic has now been approved. 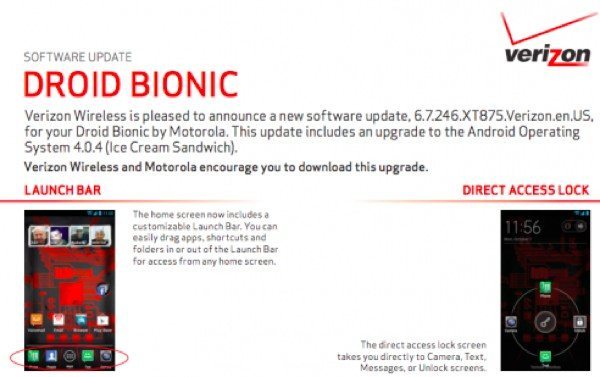 The official support docs from Verizon show the 4.0.4 ICS update as build 6.7.246 and the fact that these have now been uploaded means that the rollout of ICS for your Droid Bionic should now be only days away from beginning. According to Droid-Life it’s a 368MB download and some of the features and improvements you’ll see with the upgrade include swipe-able notifications, improved multitasking, brand-new lockscreen, more of a pure Google Android look and much, much more.

We reckon there will be more than a few of our readers delighted to hear this news and can hardly believe ourselves that ICS is finally coming to the Droid Bionic after all this time. We’d like to hear what readers feel about this. Are you one of those who was feeling pretty angry about the delay and this has come too late to make you change your mind about the way Motorola and Verizon handled this? Maybe you’re just pleased to hear that finally ICS is heading your way? We’d also like to hear from any of you when you finally receive the upgrade to give us an idea of when the rollout has actually started. Let us have your comments on this.