If you are over in the USA and your carrier of choice happens to be the Big Red, and you are in the market for a Windows Phone 8 smartphone, there will be a couple of options for you come November when the Nokia Lumia 822 and the HTC 8X handsets become available on Verizon.

According to a article over on The Droid Guy by way of WPcentral, both the Nokia Lumia 822 and the HTC 8X handsets will become available on Verizon as of the 8th of November, and have received an image from a tipster of the California blue HTC 8X sitting next to the white Nokia Lumia 822, and this is probably the first real shot of the Lumia 822. 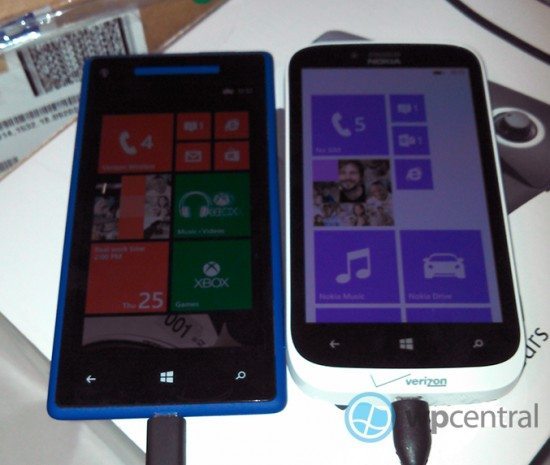 When it comes to specifications for the Nokia Lumia 822 there hasn’t been that much revealed thus far, but rumour has it the Lumia 822 will sport a WVGA 480 x 800 pixel resolution touch screen along with an 8 megapixel rear facing camera and a front facing snapper, and 4G LTE connectivity and it is assumed most of the internals will be the same as the Nokia Lumia 820.

So there you have it, those that have had their eyes on either of these two Windows Phone 8 handset should be able to grab them on the 8th of next month. Will any of our US readers be picking up either the Nokia Lumia 822 or HTC 8X on Verizon?