Once you own a Nexus 4 smartphone no doubt you are going to be looking for some accessories for the handset, and one of the features with the Google Nexus 4 is of course its wireless charging feature, and as the Google guys aren’t going to let Nexus 4 owners down in this area they are to release a wireless charging solution for the Nexus 4.

According to a report over on The Verge, the Google guys have aptly named the Nexus 4 wireless charger the Wireless Charging Orb probably due to the device looking like a half sphere, but does remind us of the WebOS wireless charging solution the Touchstone.

Apparently the charging dock is finished in a soft touch plastic, which shouldn’t mark the back of the Android smartphone, whilst the dock’s face has been set an an angle so the user can easily keep an eye on the Nexus 4, and the Google Wireless Charging Orb uses the Qi wireless charging standard, which means the device should also work with Nokia Lumia handsets. 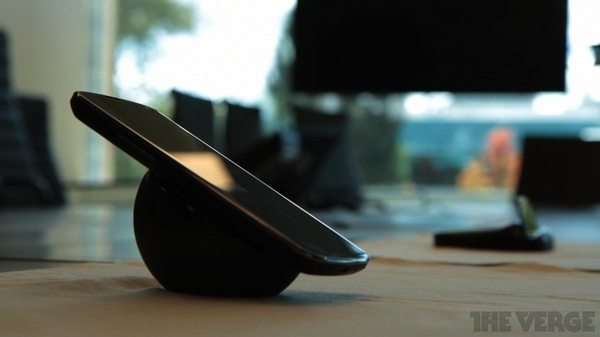 The Nexus 4 clings to that angled surface because the smartphone as well as the charging orb have magnets inside the same a Palm devices did, and of course you can slap your Nexus 4 onto the orb in either portrait or landscape.

Apparently in Android 4.2, Google borrowed another feature from Palm, a feature called Daydream that shows news from google Currents, images, and other info when the Nexus 4 is docked.

However, just when the Google Wireless Orb will come out to play with the Google Nexus 4 and how much the accessory will set you back isn’t know just yet, but obviously as and when we find out we will naturally pass it along to our readers.