Ah the long suffering iOS faithful seem to have another outage on their hands, with Apple iMessage service apparently experiencing problems, with the iOS faithful reporting issues sending messages to other users along with the built in progress bar hanging for some, but fear not because apparently Apple is aware of the problems and is apparently working on a fix to sort things out.

According to an article over on Cnet, the latest support status update from Apple at 2:15PM PT states that some users have been affected, but doesn’t actually give any detail on the scale of the iMessage problems, but have said that they are investigating and will update the status as and when more info becomes available.

I’m sure every one of the iOS faithful knows that iMessage is Apple propriety messaging platform for iOS as well as Macs, and was added into iOS 5 along with Mac OSX version 10.8 Mountain Lion, and this latest problem is the second time in recent weeks.

Here is the latest from Apple… 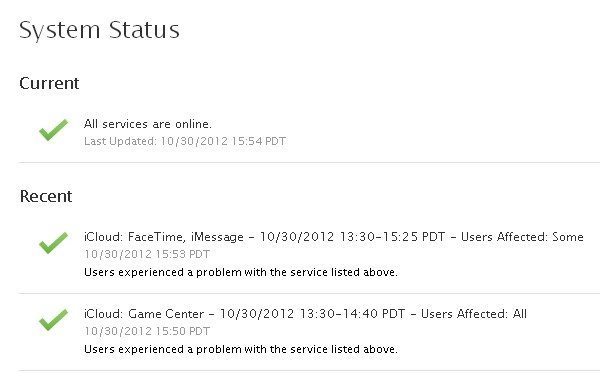 Back last month, an outage left many of the iOS faithful with the same message sending problem. Several Internet services and sites over the last 24-hours have experienced problems due to hurricane Sandy hitting the East Coast, with power companies in New York intentionally shutting off parts of their power grids that took down some website and backend services, although it is unclear whether this could be related to the iMessage problems.

We here at Phones Review would like to let you know that our iMessage is working fine and have had no problems at all, we would love for you to let us know if you are all up and running again or if you are still experiencing issues, thanks.