Nokia Lumia 920 AT&T due today with no contract price

Those over in the good old US of A that have had their eyes on the Lumia 920, and their carrier of choice is AT&T, you might like to know that AT&T will make the Nokia smartphone available on three price options, including a no contract price for those that don’t wish to have any commitment.

The Nokia Lumia 920 will be available from AT&T for a no contract price of $449.99 due today, if you simply cannot stand committing to the carrier. However if you don’t mind signing your life away there are two other options available.

You can opt for a two-year contract, which will get you the Windows Phone for $99 giving you a saving of $350 on that no contract price. Or, if you wish you can opt for signing up to a one-year agreement, which will set you back $349.99 for the smartphone. 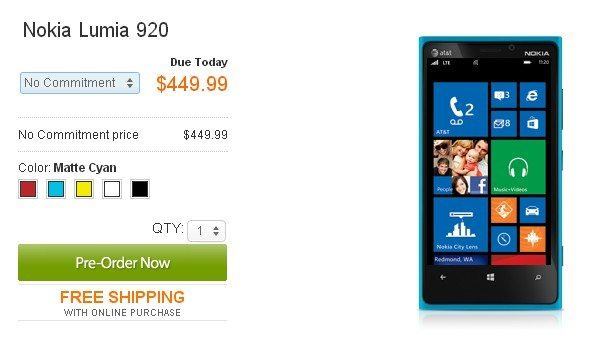 So there you have the price options for the AT&T Nokia Lumia 920, which option will you be going for, commitment or off contract?