We are now in the busy time of year where we see the shops full of eager consumers looking to pick up a bargain for themselves, or a present for someone else. There is no reason why smartphones can’t be part of this bargain hunting, and it seems T-Mobile is planning some price drops on some phones including the Samsung Galaxy Note 2 and S3.

The recent announcement of the Nexus 4 and its price via the Google Play Store for an unlocked handset will offer stiffer competition to the various carriers around the world. A previously reliable source has sent BriefMobile some images of T-Mobile internal memos that show the carrier may be about to drop the prices on a number of smartphones.

On many people’s wish list this year will be the Samsung Galaxy Note 2, and if accurate this is seeing a massive price drop on the carrier from $369.99 down to $249.99, which would make the carrier the cheapest in the US to offer the device, unless rival carriers cut their prices as well. 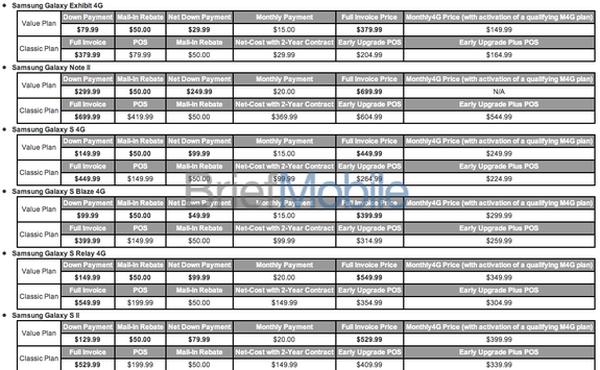 The price cuts are set to come into force today but it is not known how long these lower prices will last for, but certainly offer consumers something to think about when picking up a new smartphone this holiday season.

While the carrier doesn’t currently have a 4G LTE network up and running right now, its HSPA+ network is no slouch and as we have already told you the T-Mobile Galaxy Note 2 will support LTE in the future. Will you be getting a new handset from T-Mobile following these price drops?

One thought on “T-Mobile price drops on phones including Galaxy Note 2, S3”