If you are a fan of the Android platform there is an increasing amount of new smartphones to choose from, and especially ones that now have a larger sized screen. One such device that has recently made an appearance is the Oppo Find 5, and some new information has come to light about the handset that includes a global release with a 32GB model in tow.

Recently there was some confusion over the availability of the Oppo Find 5 with one company executive suggesting the device would only be seen in the US and Chinese markets, but then another spokesperson from the company denied this would be the case without going into more details about the regions that would see the device.

Now though the company has taken to its official Facebook page to offer some more details about the phone that include the countries that can look forward to the Oppo Find 5 being released. They have also teased the handset coming in both 16GB and 32GB flavours costing $499 and $569 respectively. 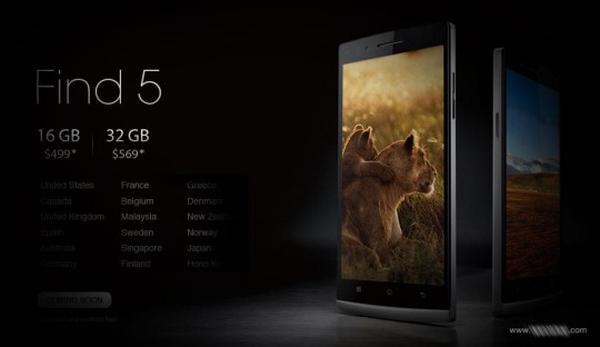 The countries that have been listed to receive the handset when it is finally released include Australia, Belgium, Canada, Denmark, France, Finland, Greece, Germany, Hong Kong, Japan, Malaysia, New Zealand, Singapore, Spain, Sweden, and the United Kingdom.

These regions are added to the Chinese and US markets that were already down to receive the handset, and proves the handset is set to go global. There is still no exact date given for the Oppo Find 5’s release, but it is expected to arrive sometime during the first quarter of next year.

To recap the Oppo Find 5 will feature a 5-inch 1920 x 1080 Full HD display that offers an impressive 441ppi pixel density, which will be powered by a quad core Qualcomm Snapdragon S4 Pro APQ8064 processor clocked at 1.5GHz coupled with 2GB of RAM.

Providing the juice will be a 2,500 mAh battery unit with the smartphone, which will come running Android 4.1 Jelly Bean out of the box, and other specifications include a 13 megapixel camera on the back, 1.9 megapixel front facing shooter, Bluetooth, HSPA+ connectivity, NFC, GPS, and Wi-Fi.

When the Oppo Find 5 was officially announced by the company there were some concerned about the lack of a microSD card port, which could be used to increase the amount of storage, but considering there will be a 32GB model that is priced competitively the handset looks set to become a hit for the company.

Will you be considering the Oppo Find 5 next year?