A new smartphone could be coming soon to Verizon called the Samsung Godiva SCH-I425, we believe that the name Godiva is just a codename but with a benchmark sheet saying “android.os.Build.DEVICE — godivaltevzw” it is certain that Verizon will be the carriers. At the CES this year many smartphones were announced and some were not such as the LG Optimus G2, but all of a sudden after CES many new devices are getting a mention through the grapevine.

Calling out to Samsung and Verizon, please do come forward and answer a few questions for us, let us explain first what we are reporting here. Has anyone ever heard of the “Godiva” SCH-I425? No, nor have we. This is an intriguing model name and obviously one that will not stick, come on would you buy a smartphone called the Godiva, sounds like the man above is a diva and we say that is wrong.

We could see the Godiva SCH-I425 being the next Stratosphere, now there is an idea. Is there a possibility that Verizon is getting a third edition Stratosphere, the GLBenchmark performance of the Samsung SCH-I425 reports that it will have Android 4.1.2 and 1,280 x 720 pixels resolution display, but the size is not known yet. 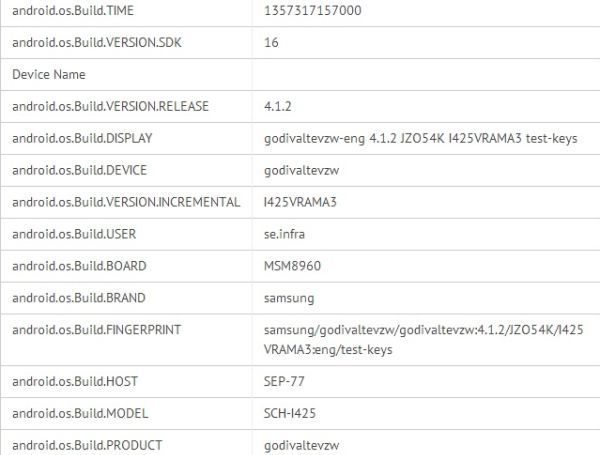 Apparently the new device will come with Adreno 305 GPU, it seems a little strange to stick a Qualcomm Snapdragon S4 MSM8960 unit in considering major smartphones are getting 1080p quad-core processors, but then again the boost is a lot better than its predecessor with a Adreno 225 GPU.

We have no idea about this phone other than the above, it is most definitely a smartphone, but what the official name will be is out of our control at the moment. As for specs and features this is another mystery, all we know is it will be another Android phone for Verizon and we are intrigued to find out what it will be called.

Do you think the new Samsung Godiva SCH-I425 will be the Galaxy Stratosphere 3?