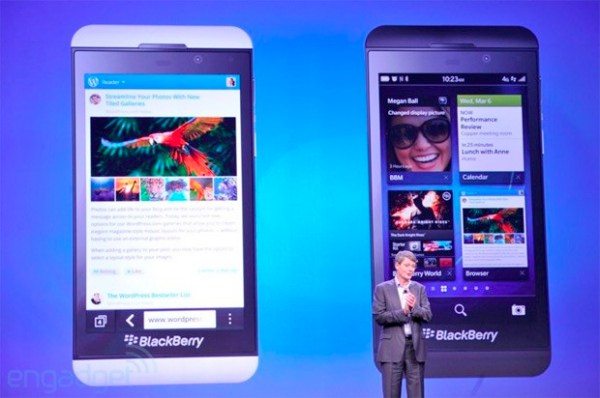 We’ve been following all of the developments at the huge BlackBerry 10 media event today and the first smartphone to launch running the brand new operating system will be the BlackBerry Z10. Fortunately for readers in the UK the BlackBerry Z10 is to release tomorrow on various carriers whereas those in the US will have to wait until mid-March. Now we have some UK carrier pricing specifics for those of you who have been won over by the Z10 and want to see how much they’ll need to pay.

In our previous article we posted full details on the specs of the Z10 so check that out at the link for more. We also gave details of pricing for the US and Canada but at that time we hadn’t heard of UK prices. We now have some confirmed prices for some, but not all, UK suppliers for the Z10 and those include Carphone Warehouse, EE, O2, Phones 4u, 3UK and Vodafone.

We also know now that all Z10 handsets will be sold 4G-ready but in the UK that service is only available on EE as yet. The Z10 will cost you Â£50 upfront at EE with a Â£41 monthly two-year contract. That will give you unlimited calls and texts within the UK and 1GB of mobile data.

O2 prices haven’t been confirmed yet but earlier today we told how the Z10 is likely to be available on O2 free with a Â£31 per month 2-year contract. This would be on the On & On plan and users would get 1GB of data along with unlimited texts and talk time. Remember though this is unconfirmed at this time.

Finally we move on to Vodafone and we had already given some leaked pricing for this carrier. We now have some confirmed details though and you can purchase the Z10 with an upfront cost of Â£29 along with a Â£42 monthly Red Data plan on contract. This will give you 2GB of data and unlimited texts and calls. Alternatively you can get the Z10 from Vodafone at no upfront cost if you pay for a Â£47 monthly plan or pay an upfront price of Â£69 with a Â£37 per month plan.

We expect to hear more details on pricing for the BlackBerry Z10 so will endeavor to keep you informed and we’ll also bring news if we hear that Orange or T-Mobile have also joined the fray to carry the Z10. In the meantime we’d like to hear your initial thoughts on the BlackBerry Z10? Could you be a convert to the revolutionary BlackBerry platform or have you always been a BB fan? Let us know with your comments.