BlackBerry Z10 on Verizon release riddle soon to be solved 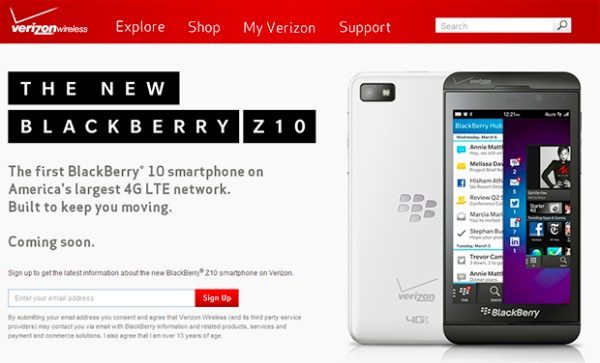 The BlackBerry Z10 is the first smartphone released running the new BlackBerry 10 operating system and as such was always going to attract a huge amount of attention. Already launched in the UK and Canada, those in the US have been left waiting and it seemed as though Verizon customers may have to wait longer for it than those using other carriers. Now though, it appears that the BlackBerry Z10 on Verizon release riddle may soon be solved.

While many are already enjoying the delights on the BlackBerry Z10 it looks likely to become available in the US at some point in March. We already told how T-Mobile US is confirmed to be stocking the Z10 but it seemed as though Verizon customers may still be drumming their fingers, as there were rumors it might not release on Big Red until some time in April. However we told how if this was the case then perhaps Verizon had planned this deliberately so that the Z10 became available from the carrier at the same type as the Q10 with the QWERTY keyboard, probably in April.

All of this was pure speculation from leaked reports though although it wouldn’t be the first time lately that a phone has arrived with Verizon later than with the other major US carriers. Now though some concrete evidence that the BlackBerry 10 on Verizon release seems to be edging closer comes with news from the FCC. It seems that the BlackBerry Z10 for Verizon has made an appearance at the FCC so this is a promising sign that maybe the release isn’t as far away as had been rumored.

A device with model number RFA91LW including CDMA and the 700MHz LTE spectrum with GSM roaming and NFC clearly seems to be Verizon’s Z10 so while we can’t say we’ve solved the mystery puzzle we do feel satisfied that a release is still coming and has stepped forward a bit closer.

Are you a Verizon customer hoping to purchase the BlackBerry Z10? If it doesn’t appear at the same time as other carrier versions, might you jump ship to another supplier? Let us know with your comments.