Verizon BlackBerry Z10 poses for the camera before release 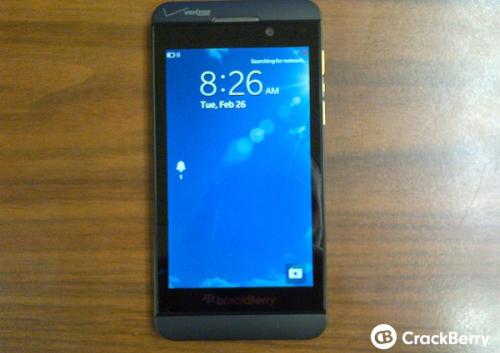 The new Blackberry 10 operating system launched in the UK and Canada with the Z10 being the first handset available on the platform, and now it seems the Verizon BlackBerry Z10 release is closer after the device poses for the camera in a number of images.

We told you yesterday that the device had stopped by the FCC, and the release of the handset may be only a couple of weeks away as the guys over at CrackBerry have got hold of a number of images showing the Verizon version of the BlackBerry Z10.

Verizon has decided to place its branding on both the front and back of the device, and are the best images seen so far of the unreleased smartphone. On the top left corner on the front of the device the Verizon logo can be seen, and on the back both Verizon and LTE branding can be found.

Some Verizon customers will be annoyed at this move by the carrier, as there was a big uproar from some users when the Samsung Galaxy Note 2 first appeared with its Verizon home button. What will be more pleasing though is the fact for the time being the carrier will be the only one in the country offering the white model officially.

The handset is going to be priced at $199.99 by the carrier with a new two year contract, but currently no exact release date has been given for the Z10 although previously rumours suggested it could be held back to come with the release of the Q10, but by the look of things mid March is still looking good.

Are you bothered by the Verizon branding on the BlackBerry Z10?