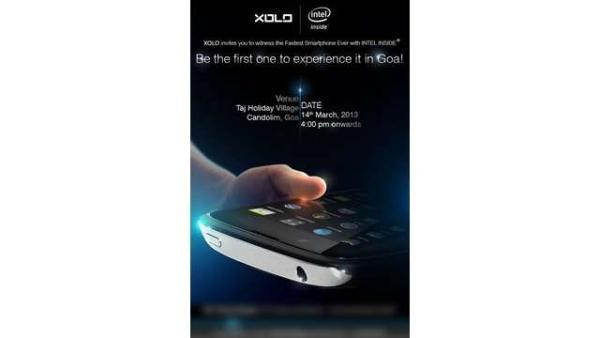 This week certainly looks to be a good one for great new smartphones being launched as not only can we expect to see the Galaxy S4, on the same day over in India XOLO are due to launch a superfast Intel based smartphone.

The company has sent out invites to an event to see what it is calling “the Fastest Smartphone Ever”, with the handset being announced on March 14th in Goa. The invitations also give a glimpse of the handset and it is believed to be using the Intel Clover Trail+ processor, which made its debut at MWC 2013 last month, and the news comes after the company released the Q800 in the country.

On the invite a picture of the handset can be seen that shows a power or lock button on the top of the handset along with a 3.5mm headphone port, and there is a blue glow alongside this that may be an LED notification light.

The two companies have worked together for a while now, and the Clover Trail+ adds a second CPU core to the processor, which helps to enhance the performance and graphics. The processor will be available in three different versions that are clocked at 1.2GHz, 1.6GHz, and 2.0GHz with each option using two PowerVR SGX 544MP” GPUs.

All of the processors offer support for Full HD resolutions and also have HSPA+ 42Mbps modems, but there is no 4G LTE connectivity offered with them. Cameras up to 16-megapixels are supported for the main unit, with 2-megapixels front facers also supported, which according to Intel can allow the main camera to support up to 15fps in burst mode.

Are you interested in the upcoming handset from XOLO?