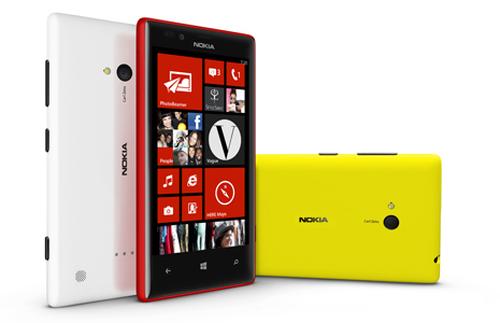 Nokia is busy expanding its range of Windows Phone 8 devices and the company announced a few handsets back at MWC 2013, and now both the Nokia Lumia 720 and Lumia 520 have been priced and dated for consumers in India.

The company recently launched the Nokia Lumia 620 in the country and now two more handsets are joining the line up with the entry level Lumia 520, and the mid-range Lumia 720. The Lumia 520 is expected to be available by the beginning of April and will be priced at around Rs. 10,500.

Nokia’s Lumia 520 is an entry level WP8 handset that has a 4-inch IPS LCD touchscreen display that is powered by a dual core Qualcomm Snapdragon processor clocked at 1GHz with 512MB of RAM. There is also a 5-megapixel rear camera and 8GB of internal memory expandable by another 64GB via microSD card, and there is a 1,430 mAh battery.

The Nokia Lumia 720 is expected to arrive around the middle of April and priced around the Rs. 19000 mark, and features a 4.3-inch display powered by a dual core processor clocked at 1GHz. There is also 512MB of RAM with a 6.7-megapixel camera, and the 720 also features a 1.3-megapixel front facer as well.

There is 8GB of on board storage which is again expandable up to 64GB via a microSD card, and battery wise the Lumia 720 benefits from a larger 2,000 mAh unit and there will be an optional Nokia Wireless Charging Cover accessory.