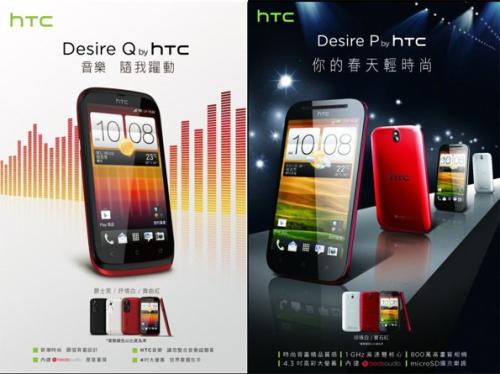 Smartphone manufacturer HTC are currently busy getting their flagship smartphone out of door and available to consumers around the world, but it seems the company is looking to expand its lower range of handsets as the HTC Desire P and Desire Q appear with specs and price pointers.

We first heard of these two handsets earlier this month but at the time not much was known about them, but now both handsets have appeared online with images, specifications and early pricing. The HTC Xperia P looks along the lines of the Desire SV that appeared last year and uses a 4.3-inch touchscreen display at WVGA resolution.

Other features include a dual core processor clocked at 1GHz along with an 8-Megapixel camera, as well as a front facer for video conferencing. There is also microSD card support and Android 4.1 Jelly Bean running on board, and the handset is expected to become available in China first priced at around $365.

Meanwhile less is known about the HTC Desire Q except it will have a slightly smaller 4-inch touchscreen display along with Beats Audio enhancements costing around $235, and available in white, black, and red colour options.

It is not known if these handsets will hit western markets or when they will become available, but they may appeal to smartphone fans that want something a little easier on the pocket.

Will you be looking at the HTC Desire P and Desire Q when they become available?