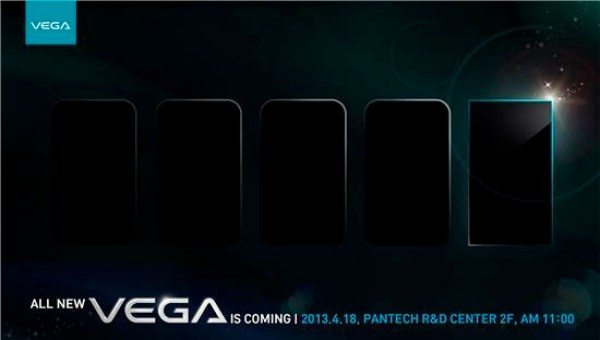 We have some news regarding a new Pantech flagship device called the Pantech Vega Iron IM-A870. This is an Android handset which we’ve heard will be officially debuted on April 18 in South Korea, so only a few more days to go until we see this rival for the LG Optimus G Pro and also the Samsung Galaxy S4.

Leaks suggest that the Vega Iron will be a bezel-less smartphone and specs include a 1.7GHz Qualcomm Snapdragon 600 quad-core processor, 5-inch full HD display with resolution of 1920 x 1080, and 2GB of RAM. Other specs include a 13-megapixel rear camera, LTE connectivity, NFC support and a 2150 mAh battery and it all runs on Android Jelly Bean 4.1.2.

Dimensions of the Pantech Vega Iron are 136.3mm x 67.7mm x 8.8mm and as a comparison this is slightly smaller although slightly thicker than the Galaxy S4. It weighs in at 154g. A teaser image (see above) has come to light but it’s nothing more than a teaser as we’re not even sure if the Vega Iron is the rounded silhouette shown or the handset with the squarer design.