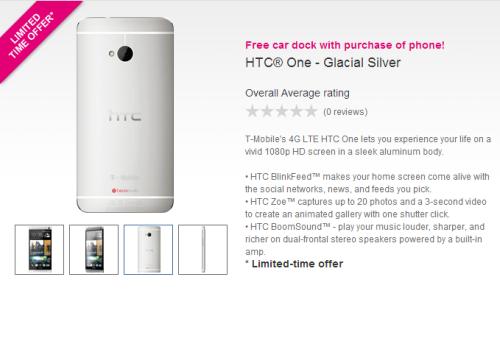 While the device may have seen some early delays due to some camera component shortages, the HTC One is slowly finding its way around the world to more markets. Now as expected the T-Mobile version of the HTC One has gone up for pre-order with the carrier giving early adopters of the handset some freebies.

As we reported a couple of days ago the HTC One smartphone on T-Mobile will be released to the masses on April 24th, and the company has now started to take pre-orders for the device and at the time of writing giving customers a free car dock for every handset purchased.

The company is offering the silver version of the HTC One for a $99 upfront fee along with two years of monthly instalments of $20, or you can purchase the smartphone for a cool $579.99 which will work out the same as the monthly route, but not everyone can layout that sort of cash in one go.

By the time the handset is available from the carrier’s stores though on April 24th this offer would have ended, so if you fancy a free car dock you need to get clicking here now. The handset marks a comeback for HTC that used to dominate the Android platform before taking its eye off the ball and letting rival Samsung steel a march on it.

The stylish looking handset has been gaining some great early reviews from those lucky enough to already have the device, and is certainly worth considering if you want a new Android smartphone this year.