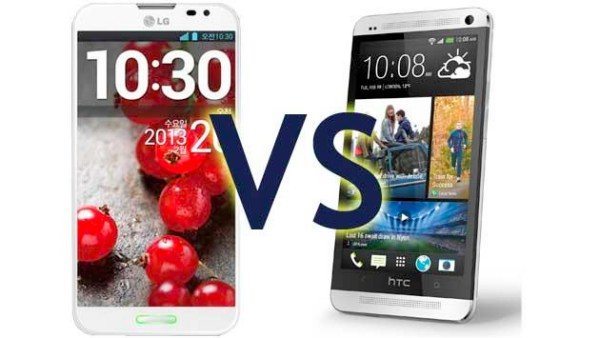 There have been some amazing new smartphone releases lately and we’re not even half way through the year. Two that are gathering attention are the HTC One and LG Optimus G Pro and both rack up some impressive specs. Today we are looking at the HTC One vs. LG Optimus G Pro in a quad-core beauties battle.

The HTC One has now released in many regions worldwide on multiple carriers. On the other hand the LG Optimus G Pro has released in Japan and Korea and as we informed earlier today, is also just about to launch in the US. Both are Android handsets so we’ll first highlight some of the major specs to show what they each have to offer and how they compare.

Processor
The HTC One has a 1.7GHz Qualcomm Snapdragon 600 quad-core processor with Adreno 320 graphics while the LG Optimus G Pro sports an identical CPU and graphics so there’s no splitting them here.

Camera Set-Up
There’s an UltraPixel 4-megapixel rear camera for the HTC One with autofocus, LED flash, simultaneous HD voice and image recording, optical image stabilization and 1080p video capture plus a 2.1-megapixel front-facing camera. In case you think 4-megapixels is rather low we should point out that this is an UltraPixel camera with each pixel said to harness 300% more light than standard sensors, especially beneficial in low-light conditions. The LG Optimus G Pro has a 13-megapixel rear camera with autofocus, LED flash, image stabilization, HDR, panorama and video capture of 1080p. It also has a 2.1-megapixel front-facing camera with dual-video recording and HDR.

Battery
There’s a non-removable 2300 mAh battery with the HTC One while the LG Optimus G Pro steps up to a 3140 mAh battery but remember it does have a larger display to power.

Both the HTC One and LG Optimus G Pro have Wi-Fi 802.11 a/b/g/n/ac, Bluetooth 4.0, NFC and LTE connectivity where applicable. Obviously we cannot detail every single specification and feature of both phones here but as you can see they are notable Android handset that should delight many users.

It’s extremely hard to choose an outright winner from the two, especially when there are so many spec similarities and ultimately we think either handset would be an extremely good option. We’d like to know what you think though.

If you had the choice of the HTC One or the LG Optimus G Pro right now, which would you pick and why? Let us know with your comments.