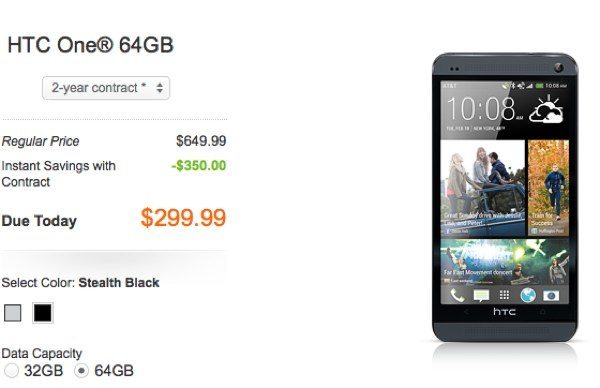 Just a few weeks ago we informed readers that the HTC One was now available on Sprint in the Black Stealth color option and how Sprint had beaten AT&T to the mark with the black version of this phone. For those who have been waiting for the HTC One in black to come to AT&T there’s good news as it has now arrived on the giant carrier in both 32 and 64GB storage options.

AT&T has an exclusive for now for the 64GB version of the HTC One in black in the US and news that it is now available should please many customers who have waited patiently for it. The specs are unsurprisingly exactly the same as the Glacial Silver model of the phone but it’s good to hear the black option is now available on AT&T.

The phone on AT&T is priced at $199.99 on the usual two-year contract for the 32GB variant or $299.99 on contract for the 64GB variant. As the HTC One does not feature expandable storage via microSD there may well be plenty of people who will splash the cash for the larger storage option.

For the off-contract price you’ll need to pay $599.99 for the 32GB black HTC One or $649.99 for the 64GB model, the same prices as for the silver model. The HTC One has proven to be a hugely successful and popular device and we’d like to know if you’ve been waiting for the HTC One in black on AT&T? Will you be paying a bit more for the larger storage option? Let us have your comments on this.