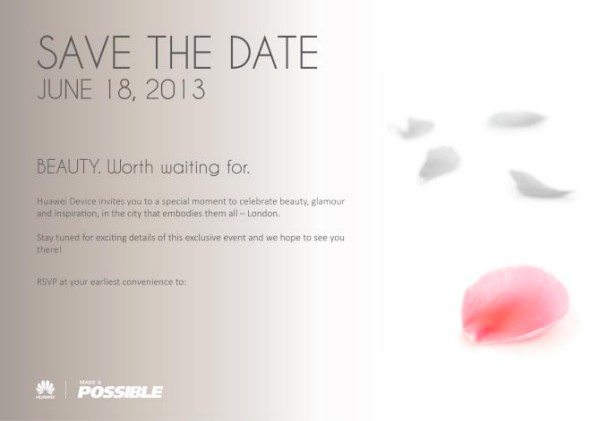 Huawei has announced an event in London on June 18 and although other things may well be announced the highlight of the event is likely to concern the flagship Ascend P2 for the UK. Key specs of the Huawei Ascend P2 include a 1.5GHz quad-core processor, 4.7-inch IPS LCD 720p display with 312 ppi, 1GB of RAM and 16GB of internal storage but no microSD for expansion.

There’s also a 13-megaxpixel rear camera with autofocus, LED flash and 1080p video capture, a 1.3-megapixel front-facing camera and a 2420 mAh battery and it runs the Android 4.1.2 Jelly Bean operating system. This is a very decent offering with the only disappointments being a 720p display rather than full HD and the fact that the internal storage is non-expandable.

UK operator Three has confirmed it will be selling the Ascend P2 when it arrives and that for now it will be supported by its DC-HSDPA Ultrafast network but that it will also have support for its 4G LTE network when it goes live later this year. The Ascend P2 may well be offered by other British operators but there is no further news on that just yet. We recently informed readers about the leaked Huawei P6-UO6 ultraslim smartphone and it’s possible that this could also make an appearance at the London event in June.

We’re really interested to hear your views about the Huawei Ascend P2 for the UK. Are you pleased to hear this handset is soon to release in the UK? If you are thinking of purchasing it would you consider doing so on Three or wait for another operator to announce it? We always appreciate your comments.