GTA on Samsung Galaxy S4 vs. Note 2, iPhone 5 and HTC One 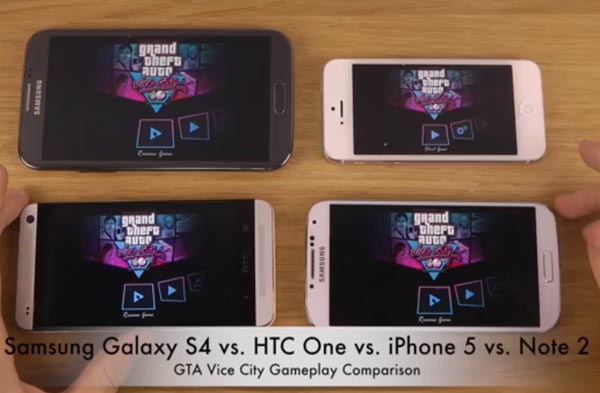 Like many other gamers, we’ve spent hundreds of hours playing Grand Theft Auto games and look forward to GTA 5 arriving on consoles later this year, although there’s some fun to have playing GTA on mobile devices as well.

There is a lot of room for improvement with GTA Vice City on smartphones, but we couldn’t help but be impressed with just how far mobile gaming has come over the past couple of years. 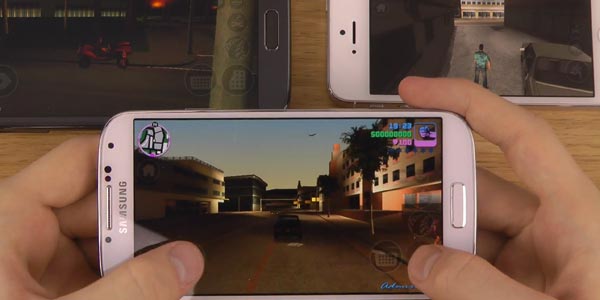 Today, we wanted to feature a video found via YouTube that showcases some gameplay for GTA Vice City. What’s cool about this gameplay is how it puts 4 smartphones side-by-side, which includes the Samsung Galaxy S4 vs. Note 2, iPhone 5 and HTC One.

Two of the best Android phones fans are talking about right now would be HTC One and Galaxy S4, although phablet users swear by the Samsung Galaxy Note 2. Then we have the Apple camp and iPhone 5, which might be smaller than most but loyal Apple users wouldn’t want any other operating system.

What smartphone looks best: Samsung Galaxy S4, Note 2, iPhone 5 or HTC One? Grand Theft Auto is one of the most popular open world action and adventure games, so combining this hands-on with the most popular smartphones right now makes a great review. Take a look at the video below, and then share a comment with your thoughts on how the game looks on each handset and your favorite. You might also want to read about the need for an official GTA 5 news app.