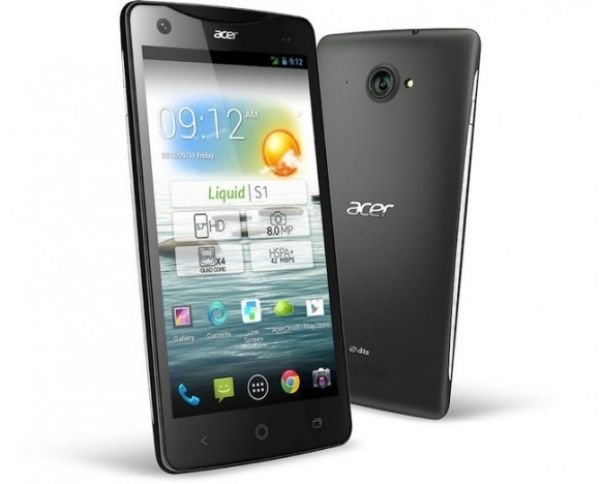 Two phones well worth comparing includes the Samsung Galaxy Mega 5.8 and the Acer Liquid S1, these are relatively similar when it comes to specs.

The Acer Liquid S1 was announced at Computex 2013 in Taipei, this smartphone comes with some great features and with a 5.7-inch display this is very close the Samsung Mega 5.8 smartphone aka phablet.

This is not an in-depth look into the Samsung Galaxy Mega 5.8 vs Acer Liquid S1, but more about the similarities between the two. The new Liquid S1 will start at â‚¬349 and will release in Belgium, Netherlands, Ukraine, Russia, Germany and UK Q3 this year, it will also be released in Italy and Spain after.

Memory
Acer Liquid S1 comes with 8 GB internal memory, 1 GB RAM and a microSD card slot for up to 32 GB. The Mega 5.8 also has 8GB built-in, more RAM at 1.5 GB and even more memory thanks to the microSD slot for up to 64GB cards.

Camera
There is an 8-megapixel camera on the Acer Liquid S1 with 3264 x 2448 pixels, LED flash and autofocus, it also has a front-facing camera (not sure of size), other features include 1080p@30fps and Geo-tagging. The Samsung Galaxy Mega 5.8 also comes with an 8MP rear camera and 3264 x 2448 pixels, autofocus, LED flash etc. It also includes 1080p@30fps, 1.9 MP front-facing camera as well as touch focus, face and smile detection.

Both devices run Android 4.2 Jelly Bean operating system, the Liquid S1 is powered by a Quad-core 1.5 GHz Cortex-A7 MTK 6589 CPU and PowerVR SGX 544MP GPU, and the Samsung Galaxy Mega 5.8 only has a Dual-core 1.4 GHz CPU.The Samsung Mega smartphone does have a better battery at 2600 mAh; the Acer Liquid S1 only has a 2400 mAh.

When you look at the specs on both devices there is not much in it, when the Acer Liquid S1 releases this year we would have trouble choosing the best smartphone. Guess it would have to come down to brand really and we believe many would choose the Samsung, but if you chose on specs alone there is not a lot of difference.

So, when it comes to the Samsung Galaxy Mega 5.8 vs Acer Liquid S1, which one would you choose?