Galaxy S4 vs. iPhone 5 on iOS 7 for reading performance 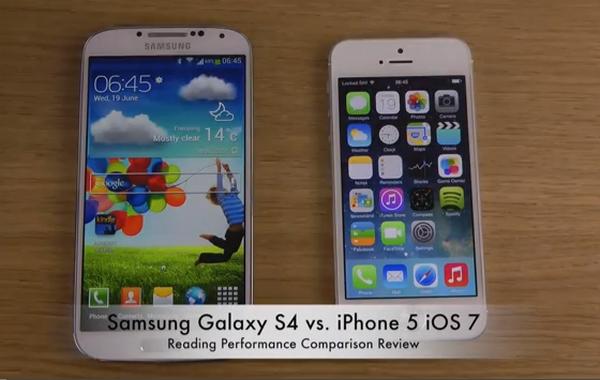 Soon after we see a new high end smartphone released the device is quickly compared to its main rivals in the market, and that can certainly be said about Samsung’s recent addition. While we have seen numerous Galaxy S4 vs. iPhone 5 comparisons previously there are now more being done with the iPhone 5 running iOS 7, and today we have one comparing reading performance.

We have already compared the two devices for gaming with the iPhone 5 running iOS 7, but today’s comparison is checking out the Amazon Kindle application on both devices. With the Samsung it is possible to change the layout of the display with various settings to improve the user experience depending on what is being viewed.

On the iPhone 5 though all that can be changed is the brightness of the screen, but as soon as the Kindle app is opened it becomes apparent that the whites are much better on the LCD display of the iPhone 5.

Obviously the Galaxy S4 has a higher resolution display that is also one inch larger and when viewing the text that is really small the S4 looks a little crisper. The various settings are adjusted on both handsets to see how they compare, but when changing the background to black on the Galaxy S4 it isn’t possible to actually see the text.

It will probably come down to personal choice which you prefer as the iPhone 5 allows for better white reproduction, while the Samsung’s larger display arguably makes it easier to read. Watch the full video and tell us what you think is best for reading.

2 thoughts on “Galaxy S4 vs. iPhone 5 on iOS 7 for reading performance”