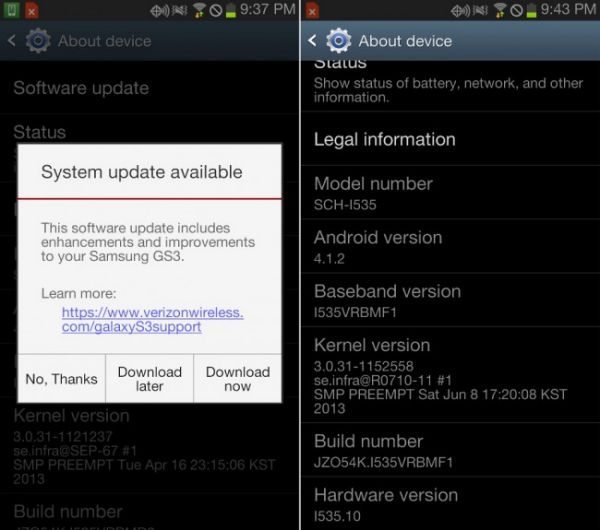 If you own the Samsung Galaxy S3 on the Verizon network you will be happy to know there is a new update for you to install, this is the new VRBMF1 update that looks like it fixes connectivity problems.

Many Samsung Galaxy S3 were experiencing connection issues and Verizon decided to pull the VRBMD3 update from the system after a few complaints came in about connectivity after installing it.

It now seems the solution has been fixed judging on the comments we read over on Droid-Life, since its readers installed the new Verizon Samsung Galaxy S3 VRBMF1 update a few users said speeds are back to normal.

The source above did say there were no specific documents explaining what the update brings to the table, but judging on users comments it seems the issues with speeds etc have been sorted at long last.

One Galaxy S3 user said that after they updated their smartphone the 4G LTE speeds went back to normal, after tests they managed to get 28481 kbps download and 6858kbps for upload. They did find that sending an attachment in a text message deemed too slow and kept showing the circle-loading icon, but after restarting the handset it finally went after 2 minutes.

Other users said that the update has fixed the data issues and so far it is running smoothly.

Please do let us know if you installed the new Samsung Galaxy S3 VRBMF1 Verizon update, did it fix your connectivity issues?