Samsung Galaxy S3 supposedly gets hotter than ever 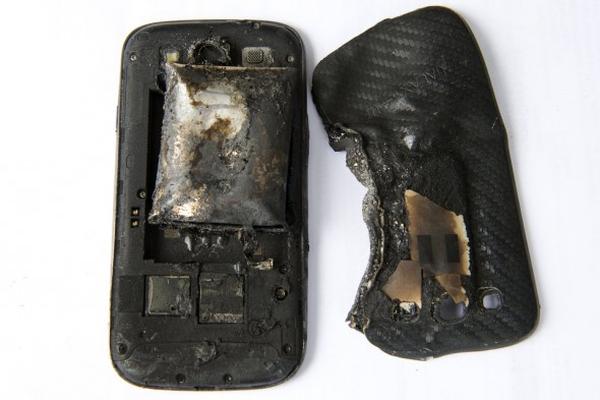 As modern mobile devices have got more powerful with higher resolution displays we have seen the batteries powering them also getting bigger as they require more juice to keep them going. Now it seems that the Samsung Galaxy S3 is supposedly getting hotter than ever, at least for one user.

The image that you can see on this page is what’s left of a Swiss women’s Samsung Galaxy S3 after it supposedly internally combusted while inside her pocket. She was busy loading a truck when she heard what she describes what sounded like a fire cracker going off.

A few seconds later her clothes were on fire and there was a strong chemical like smell in the air, and the flames then supposedly got higher than her shoulders before her boss then decided to carry her to the bathroom and soak her in water.

She was then taken to hospital and told she had suffered third degree burns to her leg along with some others to her hand, and the handsets battery grew in size by three times and leaked. Now it is not known if she will be contacting Samsung and seeking compensation, but it seems that the rear cover of the device and the battery wasn’t the official Samsung components.

You also have to wonder why it was left so long for the flames to grow that large. Now this won’t be the first time we have heard of the Samsung Galaxy S3 getting hot and melting, as previously an owner reported that his device melted while placed in a car holder only to admit later down the line that he had melted the device trying to dry it out in the microwave.

Just before Christmas we also heard of a BlackBerry Curve 9320 that allegedly caught fire while left on charge, but BlackBerry were never provided with the handset in question for investigation purposes so doubts were raised over the cause.

Do you think this is another fake claim?