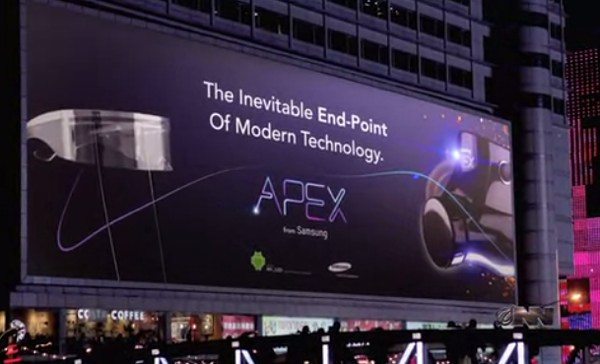 Innovators in the tech world are always trying to come up with the next big thing and if you haven’t yet heard of it we can tell you that Samsung Apex offers just that. Many of you will have heard of Google Glass and might be interested in everything it will offer when it finally comes to the market, but today we’re looking at Samsung Apex vs. Google Glass, and one certainly satisfies.

Many of you will already have heard of Google Glass, which is heading for a public release next year. This is a good example of a new and innovative idea, but it’s yet to be proven whether this is something that will be widely used a few years from now, or whether in fact it’s more of a gimmick. The glasses are currently in the hands of developers but will offer augmented reality to anyone wearing them.

Google Glass offers wearable technology and offers a display, camera, battery, touchpad and microphone as a pair of glasses. To get to the nub of it, Google Glass will allow users to see data from computers and mobile devices such as smartphones and tablets, right in front of their eyes as they go through the normal course of a day.

Obviously with developments such as Google Glass, major manufacturers are joining the fray to come up with something equally as innovative and that’s where Samsung Apex comes in as the next ‘must-have’ device. At this point we feel we should point out that although many might hope that Samsung Apex may be the next wonder product, it is in fact a figment of imagination from The Onion. It’s a great parody and in fact we showed readers a video a few days ago, that detailed just what Samsung Apex has to offer.

We’ve embedded that video below for readers to take a look, but beware if you haven’t already seen it, as it’s not for the eyes of the younger viewer. The Samsung Apex really can do it all, and if you went to know what we mean by that then check it out on the video.
The Onion certainly came up with another hilarious spoof with their creation of the Apex, which certainly knows how to satisfy!

As a brief guide we can tell you that Samsung Apex can stream video into your left eye, the Internet to your right eye, and… ahem, we’ll let you fill in the blanks, but let’s just say there’s also a version for ladies! Apparently there are already plans for a second-generation Apex too.

Obviously this is a bit of fun, but we’d really like to hear what you think of Samsung Apex vs. Google Glass. Are you genuinely waiting for Google Glass to make a public release? Maybe you’d rather settle for the Samsung Apex, to really get satisfaction? Let us know by sending us your comments.

One thought on “Samsung Apex vs Google Glass, one satisfies”