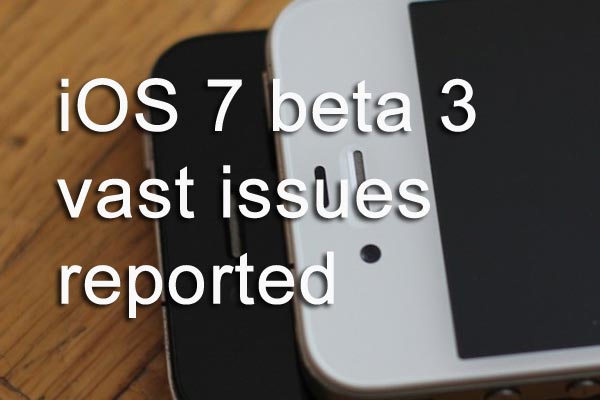 We have been looking at iOS 7 beta 3 with our in-house developer on the iPhone 5, 4S and iPhone 4. This has been the case since the first beta launched and we clearly noted problems being reported in previous articles, and also the issues being fixed in the latest iOS 7 beta 3 update. Today, we wanted to highlight the feedback Phones Review has received in regard to the latest update thanks to it being pretty vast in complaints.

The chance of iOS 7 beta 4 releasing this Monday is high, so it is good to look at the current problems with all iOS devices and specifically iPhone 5 and 4S. We have been running the iOS 7 beta 3 on these two phones and have a lot of insight.

iOS 7 beta 3 issues expected but reports are vast — we mentioned previously that developers would find problems with the software thanks to it being a beta with still up to another 2 months before public release. With this being said, we also know that it is good to highlight any problems found to aid them being fixed and for bug reports to be submitted to allow for fixes in future betas like iOS 7 beta 4 or 5.

Our iPhone 5 is testing iOS 7 beta 3 for our in-house developer and has been running pretty solid with some minor lock-ups and crashing. The developer has an iPhone 4S with major crashing problems on iOS 7 beta 3, and this has led to a black screen at least once a day with a soft reset being needed every time. This doesn’t mean that every iPhone 4S user with iOS 7 beta 3 has the same issues, in fact it is very different but issues are being reported to Phones Review.

In our earlier article that touched on iOS 7 beta 3 being needed to fix crashing on the iPhone 5 and 4S, this was published before beta 3 launched, it has over 200 comments reporting numerous issues with the current beta.

Here are some of the reported issues we have received from our readers: “Siri is not working on my iPhone 4s and Siri’s wavy speech line appears and then disappears quickly. Attempts to bring it up leads to failure”.

Another reader states their “iPhone 4 runs iOS 7 beta 3 and it crashes A LOT”. This is one of many reports about crashes from phone calls, in FaceTime video calls, while in apps and sometimes on the home screen. Again this is not the same for every use, but there are certainly a lot of people experiencing crashing that want it fixed in iOS 7 beta 4.

Another popular issue is with answering calls on the iPhone 5 with iOS 7 beta 3. This is what one of our readers stated, “I cannot answer calls in beta 3. The phone does not ring when I see an incoming call, and when I answer the call it shows 2 calls from the person with both on hold”. We received an email from one user claiming resetting their ringtone helped fix this issue for a few calls, but it would revert back to the same problem after a while. It is worth noting our review of the iPhone 5 with iOS 7 beta 3 doesn’t include this issue.

There’s plenty of other issues being reported with iOS 7 beta 3 on the iPhone 5, 4S and 4 but again certain problems are expected and will be fixed in future betas. Other problems include the loss of contacts, Notes written in letters and not words, cameras crashing on lock screen, multitasking on iPad mini just revealing a blank screen and a lot more.

What problems do you have with iOS 7 beta 3 and what device are you running?