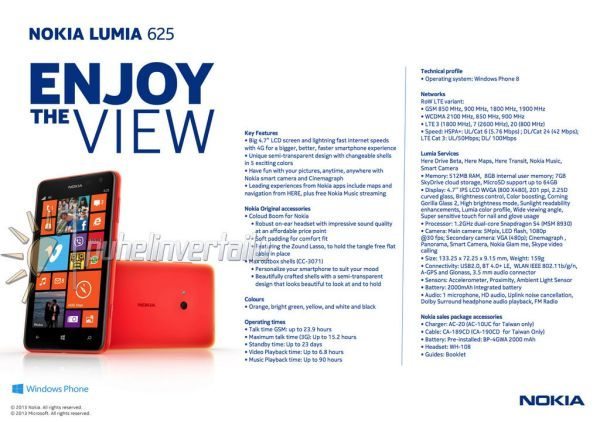 Today we teased you with the Nokia event happening tomorrow with an orange teaser image, and now we can reveal the Nokia Lumia 625 leaked full specs pre-launch. We have to take this with a pinch of salt at the moment, as we do not know the source.

We are hoping that this leak by Finnish publication Puhelinvertailu (Translated) is the real deal and hopefully the Nokia Lumia 625 will be announced tomorrow morning in London starting at 9am UK time.

The Nokia Lunia 625 photo below shows of the phone in all its glory with the full specs sheet to boot, it says it will boast a 4.7-inch LCD display with a resolution of 800 x 480 pixels and 201ppi, the display can be operated with gloves on thanks to its super sensitive touch technology, even those with long nails can use it. 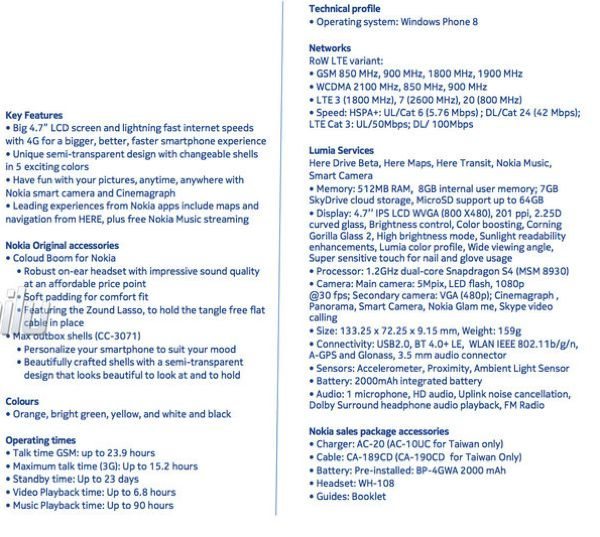 The Nokia Lumia 625 will run on the Windows Phone 8 operating system and come with a 2000mAh battery offering up to 23.9 hours talk time and up to 23 days on standby, as well as 90 hours music playback time and up to 6.8 hours video play back.

It will come with pre-installed Here Drive, Nokia Music, Here Maps and Transit. The Nokia Lumia 625 will be available in different colours such as white, black, orange, bright green and yellow.

Stay with Phones review because we will reveal all tomorrow morning from 9am UK time – Do you think these are the real specs for the Nokia Lumia 625?