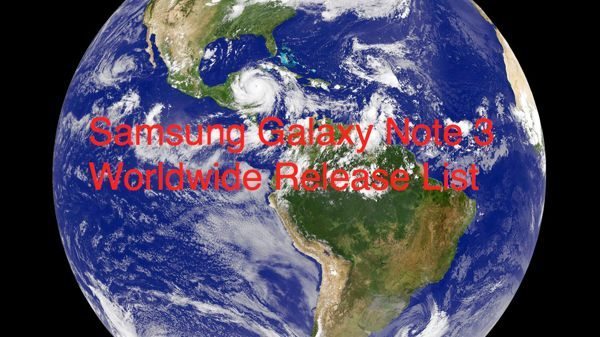 The Samsung Galaxy S4 has many variants, and to keep up with the trend they are apparently releasing three versions of the Samsung Galaxy Note 3 with one being the Duos. The main two variants will include the Exynos 5420 Octa processor and the other will house the Snapdragon 800.

Below we have listed the countries that the Samsung Galaxy Note 3 will be released in, the model names include the SM-N9000 (Exynos) even though Sam Mobile lists it as the SM-N900 (We believe they have this wrong), and the other model number is the SM-N9005 (Snapdragon).

The Snapdragon 800 version will sport 4G LTE connectivity and the other will not, but both will boast 3GB of LPDDR3 RAM. It has been reported that countries with LTE it will be the Snapdragon 800 variant will release first, time will tell as they say.

There is apparently going to be a third variant called the Samsung Galaxy Note 3 Duos with model number SM-N9002, this one will only be released in China. Samsung will reveal all in Berlin on September 4 with its own Unpacked event, we will report more very soon.

Below are the model numbers and the countries the Samsung Galaxy Note will release in, we do recommend you visiting Sam Mobile for the full list because we have not listed them all.