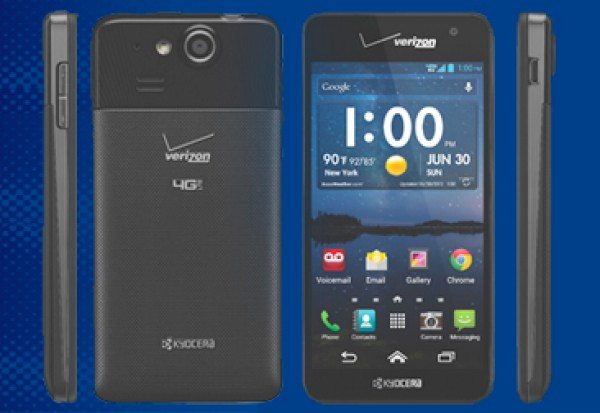 Obviously that’s tomorrow so there’s not too much longer to wait if you decide the Hydra Elite might be your next smartphone choice. When we first told about the device we mentioned the possibility that it might be waterproof, and that has proved to be the case.

Big Red is going to have a busy day tomorrow as the Moto X also releases on the carrier. The Kyocera Hydro Elite is waterproof to the extent of being able to withstand blowing rain or immersion in up to one meter of water for a 30-minute period. More and more phones are arriving that are water-resistant, and it probably won’t be long until this is a standard feature.

The Kyocera Hydro Elite is powered by a 1.5GHz dual-core processor, has a 4.3-inch display with resolution of 1280 x 720, and expandable internal storage up to 32GB. It also has an 8-megapixel rear camera, 1.3-megapixel front-facing shooter, and 2100 mAh battery. It has wireless charging capabilities, Eco Mode power management, LTE, and features Smart Sonic Receiver technology, making it easier to hear calls in noisy environments.

The Hydro Elite will launch running Android 4.1 Jelly Bean. The price of this waterproof phone on Verizon is $99.99 on contract after a $50 mail-in rebate and it’s available online from August 29. You can read more about this new Kyocera phone at Verizon here.

Are you interested in the new Kyocera Hydro Elite? Maybe you were already intending to order a new phone online through Verizon tomorrow, but have chosen the Moto X? Let us have your comments on this