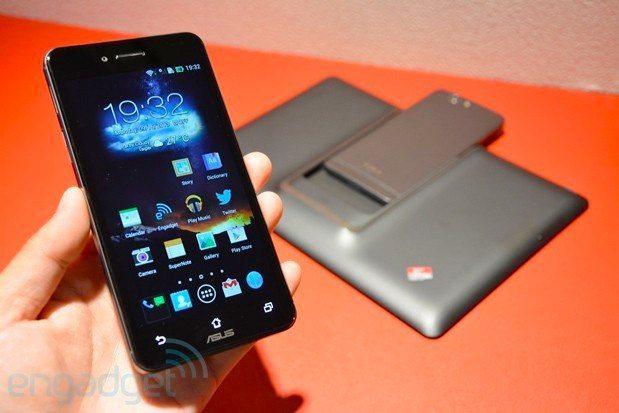 Last week we informed readers that the new Asus Padfone Infinity would be officially launched at a press event today. This hybrid smartphone/tablet device has now been unveiled, and we have further details ahead for what we’ll refer to here as the Padfone Infinity 2 to save confusion.

We now know that many of the leaked specs for the Padfone Infinity 2 were accurate and it’s powered by a 2.2GHz Qualcomm Snapdragon 800 quad-core processor rather than the 600 variety on the original Infinity. The new Padfone Infinity also has a microSD card slot, which the original version lacked.

Other confirmed specs for the refreshed handset are a 5-inch Super IPS LCD display with resolution of 1920 x 1080, 2GB of RAM, and 16 or 32GB storage options (less than the original but now expandable). There’s also a 13-megapixel f/2.0 rear camera featuring PixelMaster technology, 2-megapixel front-facing camera, and a 2400 mAh battery.

The Asus Padfone Infinity 2 runs the Android 4.2.2 Jelly Bean operating system, and it has a secondary microphone for noise cancellation plus SonicMaster audio technology. It comes in Platinum White or Titanium Black color options.

Design-wise the Padfone Infinity 2 has a more premium look and feel than the original, with a diamond cut on the metallic rear. The software has also been moderately updated, which offers a performance boost. Owners of the original model will also receive the update at some point although no potential date has been given for this yet.

The price of the newer version is NT$18,990 that’s around US$640 without a contract, while the 10-inch dock is US$240. It’s good to know that the original Full HD tablet dock that came with the earlier Padfone Infinity is also compatible with the new phone.

A release date has not been made available yet, but as soon as we hear more on this we’ll be sure to let readers know. Are you a prospective buyer of the Asus Padfone Infinity 2?