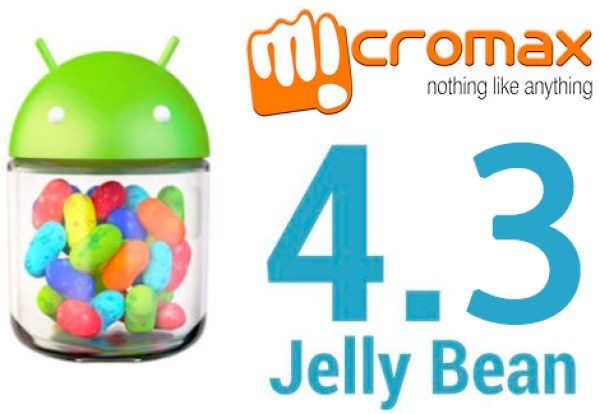 Today we have some promising news for our many readers in India, especially those who are waiting for Android 4.3 Jelly Bean for a Micromax device. It appears that the Micromax Canvas 4, Canvas HD and Doodle 2 will be receiving this update shortly.

We always try to keep readers informed about operating system updates for various devices in different world regions, and although there are plenty of devices that still haven’t received Android 4.2, Android 4.3 is slowly rolling out to more and more handsets.

Back in June we discussed the Android 4.2 update for the Micromax Canvas HD, and at that time were informed that the 4.3 update would arrive soon. However, that appeared to be rather a red herring as there has still been no sign of the update.

News today though could be significant, as MMXNewscaster has tweeted about some of Micromax’s most popular devices. We’re told that the Micromax Canvas Doodle 2 (A240), the Canvas HD (A116) and Canvas 4 (A210) will be in the first phase to receive Android 4.3 Jelly Bean.

Although the above information hasn’t been confirmed by Micromax, MMXNewscaster is usually a very reliable source of Micromax leaks. The second phase of the Android Jelly Bean 4.3 rollout will then include the Canvas Doodle (A111) and Canvas 2 Plus (A110Q), and possibly the Canvas 3D (A115), according to Micromax Rocks.

News of the Android 4.3 update is excellent for the many owners of one of these Micromax handsets, as it does appear that the update will finally start arriving soon. We’d like to hear from readers about this update for various Micromax devices.

Are you eagerly waiting to get Android 4.3 Jelly Bean on a Micromax Canvas device? Maybe you’re disappointed that your phone isn’t on the list of first phase devices?