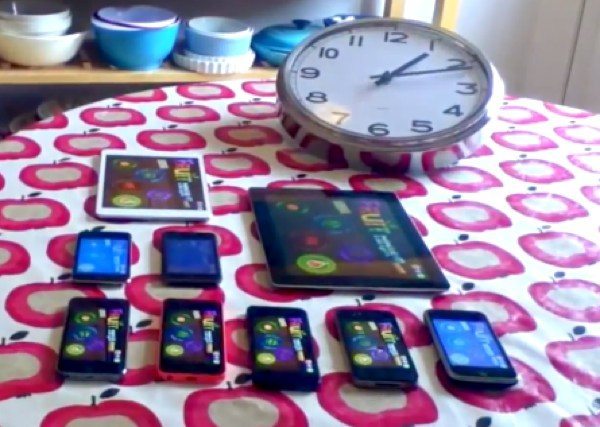 The iPhone 5S and 5C recently released to millions of potential buyers, and one of the aspects that many people are now most concerned about with a new smartphone regards how long the battery life is. We have an interesting time-lapse video to show you that shows iPhone 5S battery life tests vs. other devices in the iOS family.

It’s all very well seeing formal lab tests on battery life, but this video offers a really good real-world alternative that clearly illustrates how different iOS devices fare against each other. The iPhone 5S and 5C are both claimed to have excellent battery life, despite the many new features and functions that drain power.

The maker of this video decided to test this out by collecting together a variety of iPhones, iPod touches and iPads of different generations. Each device was full charged and then for the sake of fairness every factor that drains the battery was enabled. This meant that the brightness was on maximum, Wi-Fi, Bluetooth, and Cell Phone were all on and the auto-lock was turned off.

The last device left standing was the iPad mini that lasted a more impressive 5 hours 8 minutes. We should point out that these times are significantly less than everyday use would probably account for, and less intensive functions would mean much longer battery life times.

However, this is a good example of how the devices compare against each other as various settings were equally matched. The later generation devices clearly outperformed earlier generations, but we should take into account that the older devices will have been used much more and thus the battery performance will probably have been diminished. To a certain extent though, improved battery technology also plays a part in the later devices lasting longer.

You can check out the 3-minute YouTube time lapse video below this story and see for yourself how the devices were tested. We’re not informed by the video maker which OS the devices are running. iOS 7 recently released to the public but is not compatible with all of the devices used in this test, so this could also have made a difference.

There have been widespread reports of battery drain resulting from iOS 7 especially on the iPhone 5, although in this testing that wasn’t noticeable. This has been an issue for many readers though and we told of a simple battery life fix that could alleviate this.

We’re interested to hear what you think of this real-life testing involving the iPhone 5S battery life vs. various other iOS devices? It would be interesting to see if this reflects the result of your own iOS device with the same settings and performing the same function. Why not check out your own iOS device and let us know how yours fared?