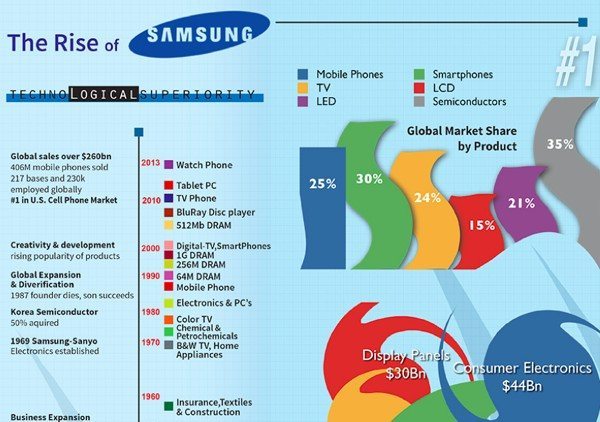 Samsung is now one of the dominant forces in the electronics industry, with its mobile devices accounting for a large part of its profits. The Samsung name is now globally known, and today we have details of an interesting infographic that shows Samsung’s rise to prominence.

The history of the giant tech company is clearly illustrated in the new infographic and it’s fascinating stuff. On a timeline of the company it’s shown that the Korean company was started by Byung-Chull Lee back in 1938 with a sum of money equivalent to $29.50 today.

Samsung then traded in fish and veg and the business started to expand further in 1950. Samsung’s first entry into electronics didn’t come until 1969 with the company extending its products to mobile phones in 1990.

At the end of the timeline in 2013, Samsung is now number one in the US cell phone market, employs 230,000 people and achieves global sales of $260 billion. There is a huge amount of further information on the infographic, including a breakdown of products and their market share.

We’ve shown a short extract here, but you can see the entire infographic at the source link below. This really does provide an absorbing account of the history of Samsung, and we recommend that you take a look. Let us know what you think of Samsung’s amazing success by sending your comments to us.