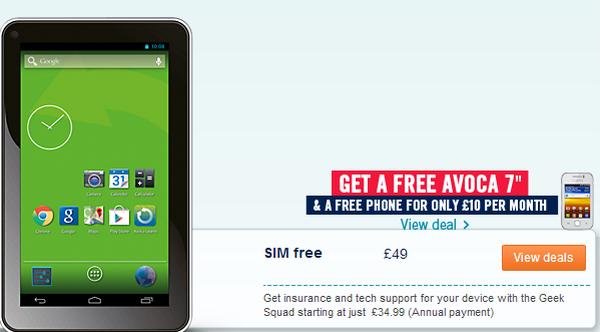 There have always been a number of low cost Android tablets available to the consumer but this range has got larger with some big UK retailers joining the fray, and now the Avoca Android Jelly Bean tablet undercuts the Tesco Hudl price.

We have recently seen the new slate from Argos launched shortly after supermarket giant Tesco launched its Hudl Tablet, which quickly led to comparisons between the two devices. Now mobile retailer Carphone Warehouse has slashed the price of the Avoca 7-inch tablet PC to only Â£49.

This is a major price cut compared to the competition with the Argos MyTablet which retails for Â£99, while the Tesco Hudl Tablet will set you back Â£119 or less depending on how many Clubcard points you have.

For your money the Carphone Warehouse will provide you with a 7-inch tablet that has a display at a resolution of 800 x 480, which is powered by a single core processor clocked at 1GHz that is paired with 512MB of RAM.

Other specifications include 8GB of built in storage with expansion possible via microSD card, front facing VGA camera, Android 4.2 Jelly Bean, and the battery is promised to provide up to 8 hours of use. While the device may not compare spec wise with a lot of rival offerings the price makes the tablet very tempting, and according to the retailer the price will remain at Â£49 until stock last.