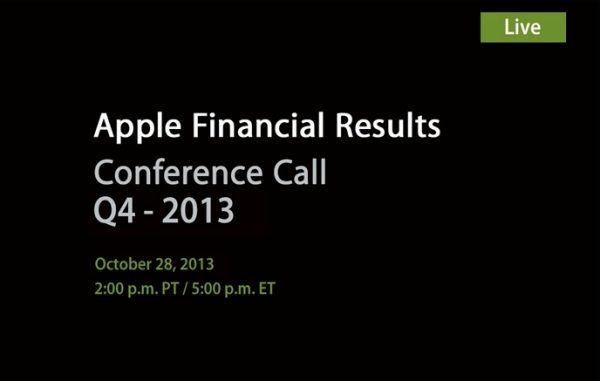 Today we reported that the Apple Q4 2013 financial results would happen today, and now we can reveal the Q4 2013 earnings full breakdown.

We all know that Apple recently started to sell its new iPhone 5S and 5C, and we have all been sitting on the edge of our seats wondering how well they have done so far in sales.

It looks all good for Apple after reading the full press release, Apple sold a massive 33.8 million units in Q4, 14.1 million iPads and 4.6 million Macs, its EPS was $8.26 with revenue hitting $37.5 billion.

The Apple press release did report that Apple’s Board of Directors has declared a cash dividend of $3.05 per share of the Apple’s common stock. This means that the dividend is payable on November 14, 2013, to shareholders of record as of the close of business on November 11, 2013.

We are waiting for the results on how many iPhone 5S and 5C smartphones were sold this quarter, as soon as we know more we will let you know.

You can listen to the live streaming audio from the financial results conference call from 2:00 p.m. PT / 5:00 p.m. ET — listen here because it has just begun.