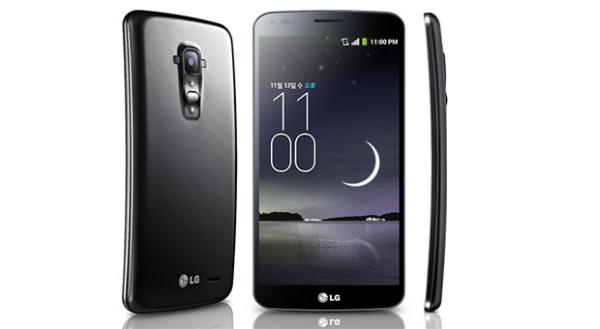 It seems according to a couple of smartphone manufacturers anyway that handsets with a curved display is going to be the next big thing, and now following weeks of leaks the LG G Flex specs and availability have been confirmed via an official launch.

The LG G Flex has been at the centre of a number of leaks recently that have included some benchmark results, but now the handset has been made official by LG. As you can see the device resembles the company’s TV’s that have already been made available with the company shrinking this down for the smartphone market.

On the handset we have a 6-inch curved display at a 720p HD resolution which is powered by the Qualcomm quad core Snapdragon 800 processor clocked at 2.26GHz that is coupled with 2GB of RAM and an Adreno 330 GPU. Other specs include a 13-megapixel rear facing camera that is placed above the two rear control buttons similar to the LG G2, and around the front we have a 2.1-megapixel unit.

The device features a 3,500 mAh battery and what is interesting is that the rear of the device features a protective film that can repair itself within minutes if it is scratched. There is 32GB of built in storage, Android 4.2.2 Jelly Bean, and the device measures 160.5mm x 81.6mm x 8.7mm weighing 177grams.

The LG G Flex will be available from next month on all the major operators in South Korea but currently pricing or if the device will be launched in other markets hasn’t been revealed.