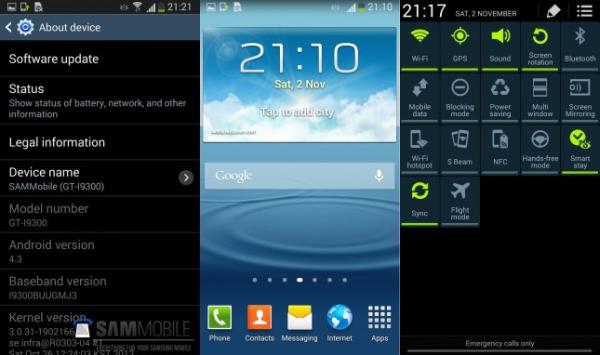 The Android platform is currently waiting for the rollout of the latest 4.4 KitKat OS for other hardware away from the Nexus 5, but there are still a lot of leading devices that are waiting for the final version of Jelly Bean. Now the Samsung Galaxy S3 has seen an Android 4.3 update leak with a release imminent.

A test build with the version number of I9300XXUGMJ9 of the Android 4.3 Jelly Bean operating system has been leaked and is available for users to download. While we don’t advise users to do such things unless at their own risk the software has been tested over a number of days and found to be pretty stable.

The handset has been sitting on Android 4.1.2 Jelly Bean for a number of months now after Samsung decided to skip 4.2 and jump straight to 4.3 instead. The software is only a test version of the firmware and features could easily be added or removed before the final public release.

As we reported before there are quite a lot of changes to the firmware over the version that is currently being fun on the device, and it comes after it was previously leaked for the Galaxy Note 2. This version of Android 4.3 still contains the original Galaxy S3 launcher and widgets, and Samsung KNOX hasn’t been included either but this is expected to change before the final release.

Both the Samsung Galaxy S3 and Galaxy Note 2 are expected to eventually receive Android 4.4 KitKat so until that arrives the Android 4.3 update will be a welcome upgrade for the handsets, and if you want to download this leaked build of Android 4.3 head over to SamMobile for full instructions.

Will you download this software or wait for the final release?