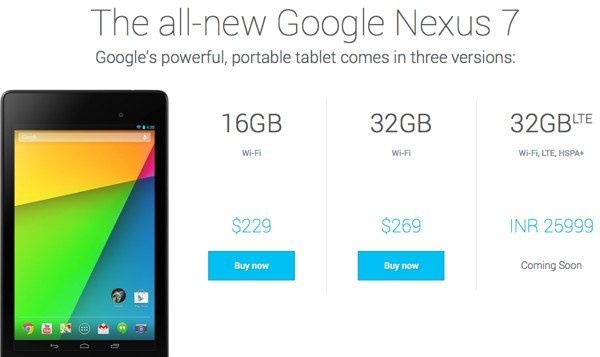 At Phones Review we really appreciate our many readers in India and like to bring the latest news about releases. If you’ve been waiting for the Google Nexus 7 2 tablet then you don’t have to wait much longer. We have the new Nexus 7 2013 price for India ahead, and it’s won’t be too much longer.

There has been a lot of positivity for the new Nexus 7, also being referred to as the Nexus 7 2, and it’s likely to be hugely popular once it arrives for India. There’s not too long to go as the Nexus 7 2013 32GB Wi-Fi + LTE version is now listed on India’s Google Play Store as “coming soon.”

Although these have a “Buy Now” option if you press this at the moment you’ll simply see a “not available in your country” message. However, the Nexus 7 2013 32GB Wi-Fi + LTE model is also listed and shows Indian pricing of Rs. 25,999, and it’s this model which is tagged “coming soon.”

Specs of the Nexus 7 2013 include a 1.5GHz quad-core processor, 7-inch Full HD display with 323 ppi, 2GB of RAM, a 5-megapixel rear camera and 1.2-megapixel front-facing camera. You might find it useful to check out our earlier article with a specs comparison of the Retina iPad mini 2 vs. Nexus 7 2.

Are you in India and eagerly awaiting the arrival of the Nexus 7 2013 on the Google Play Store? What are your thoughts on this initial price news for the 32GB LTE variant? Let us know by sending us your comments.