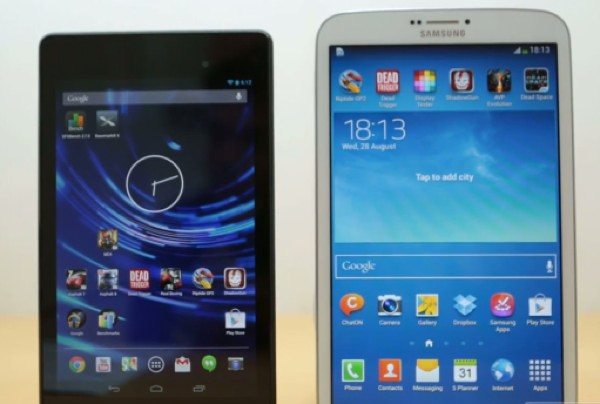 Many people may be considering a new tablet purchase over the next few months. If you are one of our readers in India you may be interested in this comparison of the Google Nexus 7 2 vs. Galaxy Tab 3 311 for India.

The Google Nexus 7 2 is the second-generation Nexus 7, otherwise dubbed the Google Nexus 2013. It recently made an appearance on the Google Play Store India with pricing. Meanwhile the Samsung Galaxy Tab 3 311 is available for India, and as both of these are Android tablets with similar sized displays they will be natural competition against each other.

The 8-minute YouTube video below this story gives a good look at what each of these tablets has to offer and will help in making any decision between the two. It starts with taking a look at the design and build quality and a tour around the hardware of the Nexus 7 2 and Galaxy Tab 3. This will give you an idea of your personal preference as far as appearance is concerned.

The video continues with detailing the displays, with the pixel density of the Nexus 7 2 far exceeding that of the Galaxy Tab 3. More specs are then compared including processors, RAM and storage before comparing the camera set-ups of the devices and then the user interfaces, batteries and more.

The verdict on these tablets shows that they both have a lot to offer, but that one of them outshines the other in many areas. We won’t spoil the conclusion so please do check out the video below to see for yourselves.

Once you’ve viewed the video comparison we’d appreciate your comments. If you are in India and about to purchase a new tablet, will your choice be the Google Nexus 7 2, the Galaxy Tab 3 or another tablet entirely?